It’s time for church all you heathens. Now sit down and listen to the MMA gospel.

In the beginning was the streets, the streets were with Kimbo, and the streets were Kimbo.. Kimbo Slice fought in backyards and boatyards and became famous for his miraculous hands. He was tempted by Satan Gary Shaw but eventually found his Father Dana White who put him on TV and he henceforth lives in the hearts of believers all over the world. Kimbo Slice had a son. He was not a virgin and never claimed to be. That son was named the Son of Slice and he followed in his father’s footsteps and today we have a video of the Son of Slice imitating the ways of his legendary father.

Jose Canseco was one of baseball’s top home-run kings. He was also an avid steroid user who outted several friends, teammates, and other players in a tell-all book. Since retiring from baseball, Canseco has also tried his hand at boxing and mixed martial arts.

His only official professional MMA bout was in DREAM‘s 2009 Super Hulk Tournament against the gigantic 7 ft. 2 in., 319 lb., Korean fighter Hong Man Choi (2-3 MMA, 12-6 kickboxing). It took the giant just over one minute to submit Canseco due to punches.

The 46-year-old Canseco decided to pick on someone a little more his own size (but not his own age) this weekend as the former slugger participated in a exhibition boxing match against 60-year-old University of Arkansas Little Rock Assistant Athletic Director, Gary Hogan.

After four, two-minute rounds, Hogan, 16 years the elder, emerged victorious with the judges’ score of 39-37. From the book of Boxing, chapter 10 verse 5, we watch…

UFC middleweight contender Chael Sonnen has a title fight coming up against champion Anderson Silva, the man believed to be not only the best middleweight in the world, but many make a good argument for him being the best pound for pound fighter in the world.

Sonnen is 4-3 in his UFC career and 3-1 in his current UFC incarnation. His last five victories have all come by way of unanimous decision. Most impressive was what he did in his last fight against Nate Marquardt, completely and relentlessly assaulting him, putting him on his back, and putting a fifteen minute beating on him the likes of which we have never seen anyone do.

Aside from his improvements inside the Octagon, Sonnen has garnered even more attention with a PR campaign that could have only been produced by Satan himself.

Sonnen has shown absolutely no respect for Anderson Silva, his manager or training partners, and when they fight at UFC 117 on Aug. 7, Sonnen will have his opportunity to back up everything he has said.

A few of the more interesting statements coming from Sonnen recently stem from an open letter he wrote to his fans last week and an email interview and correspondence he did a couple of weeks ago with reporter Jon Lane. Here is a quote from the open letter where he once again addresses Silva’s manager, Ed Soares:

And Ed, I saw your recent comments. Not bad work. Hats off. You come across as professional and accountable in every respect…which makes your inability to control, explain or denounce Anderson’s behavior quite puzzling to me. THAT’S one of the main reasons we are where we are with all this: because you can’t make him fight.

You can’t explain why he does what he does and you refuse to give a consistent, rational explanation for it. It’s like you keep trying to sell the kids faulty fireworks that turn around after 10 feet and come screaming back and hit them in the eye or blow their hands off.

Are you aware that you represent the generally acknowledged best fighter in the world in the premier promotion on planet Earth and that the president of that company has promised to FIRE HIM for his behavior?

Aren’t you just a little embarrassed by that?

If you still have not read the entire open letter, you can read it in its entirety at FIGHT! Magazine.

And if you missed his email interview and correspondence with reporter Jon Lane, it is a MUST READ, if for no other reason than sheer entertainment value. The ending will give you an idea of what was going on:

It seems to me you’re not getting it, Jon. Let me make this absolutely CRYSTAL CLEAR for you. You contacted me, and requested an interview. You GOT one. I took the time to read your rambling, unfocused, semi-coherent questions, and answered them. You have CONSISTENTLY DODGED the question of whether or not you will publish it. And I should remind you, Jon, that in this age of the Internet, NOTHING GOES AWAY. NOTHING. You can not, and WILL NOT, since I WILL NOT ALLOW YOU TO, bury or ignore what YOU wrote, or what I wrote. I have enjoined you repeatedly and asked you whether or not you plan on publishing it, ALL OF IT. If NOT, I WILL. It EXISTS. You can acknowledge it,and find a way to accommodate it, or turn your back on it; in which case, it will lock its jaws around you and start swallowing. As sure as night follows day, your words will find you out.

You can read the entire transcript that was supposedly leaked by Sonnen HERE.

To close our ProMMAnow.com Sunday Sermon we will read from the book of Prophecy, also known as the book of gambling odds in the New No-Holds Barred Version, chapter 2, verse 3:

Oracle Paul the Octopus not only knows soccer, but if you’re looking to place a wager on the upcoming Silva vs. Sonnen title fight, you should probably heed the wisdom of the eight-armed urchin. 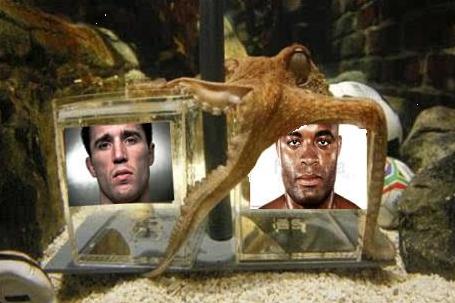 If you have no idea who Oracle Paul the Octopus is and his predictions for the FIFA World Cup, check out his Youtube videos. Apparently, the little bastard has never been wrong, and his videos have almost as many views on Youtube as Kimbo Slice! Now that’s one famous fish!