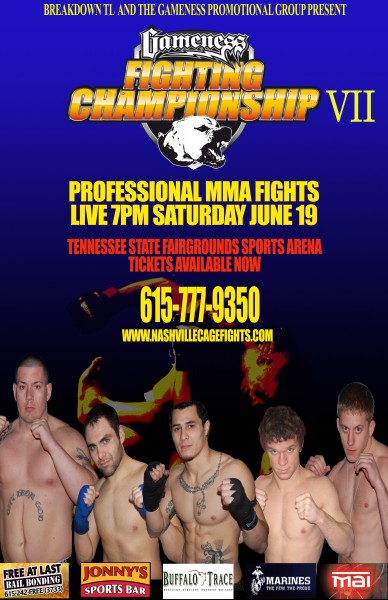 Ortiz overwhelmed Beard right out of the gate, quickly getting the fight to the ground, then took the back of Beard as he rolled, locking in a fight ending rear naked choke that forced the tap almost immediately.

Justin Pennington may have been the Strikeforce veteran coming into his bout with Cory Alexander, but someone forgot to tell Alexander to be impressed. In a very exciting and technical bout, the momentum seemed to swing to each fighter every few seconds as both fighters constantly scrambled for dominant positions.

Both guys had there share of sweeps and reversals when the fight was on the ground, but the key moment in the fight happened on the feet, as Alexander landed a brutal right hand that bloodied the face of Pennington. Once the fight hit the ground, Alexander took the back of Pennington and locked up a fight ending rear naked choke.

Scrivner wins by way of DQ

Spencer Scrivner landed some brutal, unchecked knees to the thigh of Steve Chico from the clinch in the first round, but it was a knee of another kind that would end the bout prematurely.

After a scramble in the second frame, Chico took the fight to the ground, and as Scrivner worked to get back to his feet, Chico landed a devastating knee to the face of Scrivner while he was still on his knees.

It was an obvious illegal blow, and after a referee stoppage to check on Scrivner, the fight was declared over, and Scrivner was awarded the win based on the DQ.

NMMA fighter Ashley Gooch made his pro debut tonight, and many thought that his bout would end by KO, win or lose. Instead, the fight turned into a ground battle with Gooch controlling the action for much of the bout.

The constant pressure applied by Gooch on the ground tested the cardio of Donker, as Donker crawled back to his corner between each of the rounds. Gooch nearly finished the fight in the third, gaining a dominant crucifix position, and dropping big shots to the face of Donker.

James Foster decided right at the beginning of his fight with Team Lloyd Irvin fighter JC Cuffee, that he would take the fight to the ground. His attempt to shoot and take the fight to the floor got stuffed, and within a couple of seconds, Cuffee slapped on a tight guillotine that forced Foster to tap immediately.

In other action from the amateur card, Chris Camacho added a highlight reel KO, with a one-punch knockout of Angelo Gisante after surviving a tight guillotine attempt earlier in the fight, just 7 seconds into the second round.