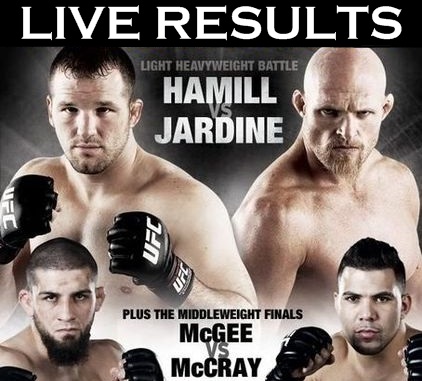 LAS VEGAS, Nev. – “The Ultimate Fighter 11 Finale” takes place this evening at the Pearl inside the Palms Casino Resort in Las Vegas, Nev. Headlining the event is The Ultimate Fighter middleweight tournament finals featuring Court McGee vs. Kris McCray. Both guys battled it out with a lot of tough guys on the Spike TV reality show to earn their spot in the finals, now it is time to see who is the true Ultimate Fighter and will win the highly coveted six-figure contract with the Ultimate Fighting Championship (UFC).

Other bouts on the card consist of Keith Jardine vs. Matt Hamill in the co-main event. Jardine is literally fighting to keep his job with the UFC at this point, having lost his last three fights. Chris “The Crippler” Leben will take on Aaron Simpson, and Spencer Fisher will take on Dennis Siver.

The action starts at 8:00 p.m. CT live on Spike TV and ProMMAnow.com will be right here posting the live results and play-by-play commentary as it happens. Join us tonight and share your thoughts on this 11th season finale of The Ultimate Fighter.

Round 1 – “Fro-cop” is back. Fans in the audience are wearing afros. Yager lands a couple of right hooks down low as Attonito moves in close, then backs out. Yager swings big with a one two, moving in and out, Attonito goes for the takedown. Yager fights it off but eventually goes down for about a split second. Yager back up looking to attack. Yager is very athletic, lands a leg kick. Another big leg kick stops Attonito briefly in his tracks. Leg kick from Yager, a counter right from Attonito. Nice left hook scores for Attonito. Leg kick Yager, counter right by Attonito, then Attonito shoots, puts Yager against the cage. Yager lands an elbow then a leg kick as Attonito backs up. Nice right hand from Attonito. Right hand scores for Yager, then an inside leg kick. Good round. I give it to Yager 10-9.

Round 2 – Yager’s punches looking solid and powerful. He has some vicious hooks. Nice footwork from Yager, he avoids Attonito’s punches by slipping them. Attonito lands a nice left hook and a leg kick. Yager returns with a leg kick of his own. They exchange shots, both scoring, with Attonito getting the better of the exchange. Yager appearing to slow a bit, dropping his hands a little, getting sloppy and Attonito is scoring more with his punches. Nice right hand scores for Attonito. Right hand scores for Attonito. Attonito takes his back, has hooks in on the ground. 1:20 left in the round. Yager turtles up, and allows Attonito to flatten him out, Attonito pounds away with numerous big punches until the ref stops it. Yager is good but he blows his load too fast.

Round 3 – Leg kick Siver. Head kick Fisher scores. Kick to the groin from Siver. Leg kick Siver. Siver putting on the pressure. Leg kick Fisher. Body punch Siver, then a left hook scores. Siver with a leg kick and combo punches. Fisher lands a hook to the back of the head. Very close round. Body shot by Fisher. Lots of near misses from both guys. Body kick from Siver. Body kick from Siver. Siver shoots right at the bell but it sounds before the takedown. Very close round but I give it to Siver 10-9 and the fight to Siver 29-28.

Round 1 – The return of “The Crippler”! Leg kick Leben. Simpson gets a big takedown on Leben fairly easily. Leben gets up, puts a knee on the ground. Simpson goes for a guillotine but LEben gets out, they clinch. Dirty boxing and foot stomps from Leben. Simpson kneeing the thigh of Leben from the clinch. Nice left from Simpson. Simpson slams Leben and lands some shots. Leben gets up, drops a knee. Stands up now, lands a heavy left hook. Simpson lands a one two right on the chin, then a right hand again on the button. Leben’s chin holds firm. Simpson gets underhooks, drops levels, kneeing the thigh again. Simpson can’t get the takedown but I give him the round 10-9.

Round 2 – Nice left by Simpson right on the chin. They slug it out for a few seconds, Simpson shoots and Leben defends the takedown successfully. Leben keeps throwing punches, Simpson tries to fire back but Leben got the better of the brawl. Leg kick Leben. Left hand from Simpson, but Leben eats it and keeps going forward, lands a leg kick. Simpson tries to tie up and Leben pushes him off. Simpson slowing down, but lands a nice left on the chin. Leben with a solid left. Leben with a nice inside leg kick. Leg kick Leben. Leben drops Simpson with some punches, Simpson gets up tries to run away but he falls down, losing his footing and the referee calls the match. Leben landed about four big big lefts right on the button and stops the “A-Train”. Great win for “The Crippler!!”

Round 1 – Jardine needs this win very badly. He’s lost his last three. If he were to lose this bout, it’s likely he will be cut from the UFC. Hamill is stalking. Hamill with the dirty boxing, Jardine escapes. Hamill with a jab scores. Leg kick by Jardine, then lands some jabs. Big leg kick from Jardine. Another two leg kicks from Jardine. Hamill lands a punch. Jardine lands a couple of punches and a solid leg kick. Body kick from Jardone. Jardine lands a couple of shots, puts Hamill against the cage. Jardine with a big leg kick. Hamill shoots, gets stuffed. Big leg kick by Jardine. Head kick by Jardine. Hamill lands a jab. Jardine getting the better of the striking exchanges. Leg kick Hamill. I give that round to Jardine 10-9. He looks better than he has in some time.

Round 3 – They barely even cleaned the blood off of Jardine’s face. Hamill shoots, gets stuffed. Hamill lands a shot and Jardine with a leg kick. Big leg kick from Jardine and Hamill gets the takedown. Hamill gets on Jardine’s back, Jardine gets up though. Time out is called to check Jardine’s cut. It’s a go. Big right uppercut from Jardine. Hamill shoots, gets stuffed. Leg kick Jardine. Time is called to put Jardine’s mouth piece back in. Ref said they would take a point if it happens again. Big knee from Hamill from the Thai clinch. Hamill lands a couple shots. Jardine with a uppercut and a right. Hamill shoots, gets stuffed again. Hamill has the forward motion but Jardine out struck him in this round. I give that round to Jardine 10-9 and have the fight as a draw 28-28.

Round 1 – Court McGee walking out with John Hackleman, Chuck Liddell, and Howard Davis Jr. in his corner. That’s big and has to give him enormous confidence. Rich Franklin and Lloyd Irvin in Kris McCray’s corner. Buffer messed up on the color of the corners… that does not happen very often for the Buff-man. Mazzagatti is the ref. This is for all the marbles. They clinch, and separate. McGee gets the takedown. McCray has full guard. McGee puts McCray against the fence. But McCray uses it to get up. McGee takes him right back down. McGee postures up, lands a big left hand, has McCray pinned against the fence. McCray gets up. They exchange punches and tie up. They let go swing, and tie up again. McGee gets a body lock takedown and lands in half guard. McGee goes for mount and McCray escapes and gets up. They exchange punches . Nice right hand by McGee as the tie up again. They swing away as the round ends. McGee gets that round decisively 10-9.

Round 2 – They exchange punches and tie up. McGee gets the takedown and gets full mount. McGee goes for an arm triangle but can’t get it. McGee still has full mount. McCray finally escapes and gets back to his feet. McCray lands a right but McGee gets a huge takedown carrying him all the way across the cage. McCray has a cut on his forehead. McGee taked McCray’s back, puts the hooks in and McCray taps out due to a rear-naked choke.