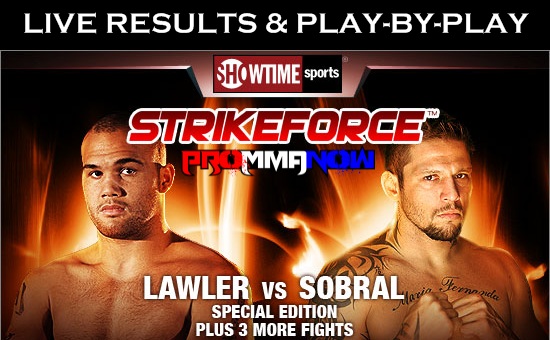 Round 2 – (picked up play by play at 3:15) Nice left hook by Noons. Nice knee to the body bo Noons. Leg kick  by Henun knocks Noons off balance. Leg kick by Noons. Knee to the body by Heun. Left jab by Noons, and again. Heun landsa  left. Right and left scores for Noons. Heun fires back after being rocked a bit. Heun shoots and misses. Left, then a right by Henn. Big left hook by Noons. Head kick blocked by Heun, then Henun gets a takedown as the bell sounds.

Round 1 – Kennedy throws a couple shots and shoots. Prangley gives him a hip toss and puts Kennedy down but he pops right up like a Mexican jumping bean. Kennedy goes for another takedown. Kennedy with a right hook out of the clinch. Prangley gets a takedown trip but Kennedy gets right up and gets his own real takedown and is in half guard. Kennedy lands a rib shot and tries to pass guard, he actually gets full mount very quickly. Prangley tries to get out the back door and stands in a squat. Kennedy locks on a rear naked choke and Prangley taps out. This was Kennedy’s first full training camp they said since joining the Army years ago. Kennedy looked very solid in this fight.

Round 1 – Marius lands a high kick. Cyborg lands a leg kick then rocks Marius with a punch. Cyborg catches a kick and fires back. Head kick blocked by Cyborg and fires back with a shot. Leg kick by Cyborg. Head kick rocks Marius. Cyborg moves in lands a big right hook as Zaromskis throws a flying knee. Zaromskis falls to the ground, Cyborg follows up with punches and Herb Dean steps in to stop it. It’s a big win for Cyborg and lady Cyborg the champion rushes in, lifts her husband up and gives him a kiss.

NOTES: The Fight Professor says the winner will get a title shot in their respective weight class. However, King Mo has already told us he will not fight Babalu. That’s one of his main training partners.

Round 1 – Leg kick Sobral. Sobral gets a body lock, throws some knees. Lawler lands some knees to the thighs. Ref separates them. Big left hand by Lawler scores. Flying knee by Lawler. They tie up, exchanging knees and body shots. Babalu has a cut under his eye. Babalu swings, misses, Lawler counters. Lawler is waiting to counter. Leg kick by Babalu, he gets a takedown, but Lawler gets right up. Lawler tries to kick and falls to the mat. Babalu tired a D’arce but Lawler gets out and up. Leg kick from Babalu. Body kick from Babalu. Babalu with an overhand left,misses. Right hand by Babalu scores, Lawler counters. Close round but I give it to Lawler 10-9.

Round 3 – Right straight from Lawler. Babalu gets a single but lets it go. Left hand by Babalu. Babalu grabs another single, lets it go. Left hand by Lawler. Left hand by Babalu, then a leg kick. Another leg kick. Spinning backfist by Babalu blocked by Lawler. Head kick from Lawler blocked. Front kick from Sobral. Body shot by Sobral. Lawler has slowed. Lawler lands a one,two. Nice right hand by Lawler scores. One minute left. Lawler headhunting now. Babalu trying to keep him off. Lawler lands a right hook just as the bell sounds. Damn… very close. I give the round to Lawler 10-9 for the stalking.

NOTE: Babalu has an enormous cut over his left eye. Lawler’s face is pretty much unmarked. Babalu was asked if he would fight King Mo. Babalu says he would like to fight Dan Henderson. He lost to him many years in Rings way back in 2000.