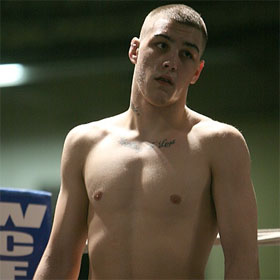 LAS VEGAS, Nev. — Following two straight losses inside the Octagon, and most recently a unanimous decision loss to Efrain Escudero at UFC 114 in May, Dan “The Upgrade” Lauzon (12-4 MMA, 0-3 UFC) has been released from the UFC, according to the Boston Herald.

Lauzon is still credited as the youngest person ever to fight in the UFC. He was only 18 when he fought Spencer Fisher at UFC 64 in 2006. Unfortunately for him, Lauzon lost that fight via TKO in round one.

Nearly four years later, in January of this year, he returned to the organization against Cole Miller at UFC 108. Miller submitted Lauzon via kimura in the first round.

Lauzon has done very well outside the UFC, losing only once compared to 12 victories. In those 12 victories outside the Octagon, six came by knockout and six by submission.

It is obvious Lauzon is a very talented and well-rounded fighter. However, when given a chance against the top tier competition, he has fallen short.

His brother, UFC lightweight Joe Lauzon, along with former coaches, would likely argue the reason for the shortcomings are due to his training habits, or lack thereof. In fact prior to the Escudero fight, Joe and his coaches gave Dan a training ultimatum that ultimately led to their split.

Dan Lauzon’s profile has already been removed from the UFC website.