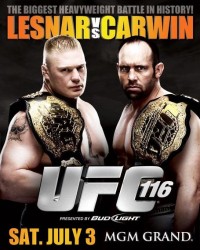 The first bout scheduled to air on Spike TV is a middleweight contest between Kendall Grove (13-7, 1 NC) and Goran Reljic (8-1).  The pride of Maui, Hawaii, Grove burst onto the mixed martial arts scene by winning Season 3 of “The Ultimate Fighter” in June 2006.  Grove’s last three wins in the Octagon® have come over Evan Tanner, Jason Day and Jake Rosholt and he will look to make a statement on July 3rd against Croatia native Reljic.   The hard-striking Reljic made quite an impression in his UFC debut against Wilson Gouveia at UFC 84 in May 2008, winning via TKO and earning a “Fight of the Night” bonus. Following a layoff due to back surgery, Reljic engaged in a hard-fought three rounder against C.B Dolloway in his return to the Octagon at UFC 110 this past February.

The second scheduled bout of the evening on Spike TV features a heavyweight clash between “The Ultimate Fighter 10” finalist Brendan Schaub (6-1) and Chris Tuchscherer (18-2, 1 NC).  Fighting out of Aurora, CO, Schaub easily handled Chase Gormley with a TKO victory in a mere 47 seconds this past March.  A former Buffalo Bills practice-player, Schaub has honed his craft while training with Shane Carwin.  He will look to use his prodigious punching power against former All-American collegiate wrestler, Tuchscherer. The Fargo, North Dakota product currently trains with Brock Lesnar and most recently defeated Tim Hague via decision at UFC 109 in February.