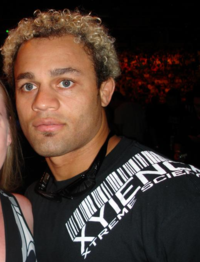 UFC’s number one welterweight contender, the man who will fight champion Georges St-Pierre (20-2 MMA, 14-2 UFC) for the title at the culmination of their coaching duties on “The Ultimate Fighter” season 12, apparently got wind of a recent interview with UFC President Dana White, in which he said Josh Koscheck (15-4 MMA, 13-4 UFC) was “not a team player.”

Koscheck has fired back:

“Dana White doesn’t like me, apparently. That’s what he says. I’m not a team player. I don’t understand how he can say that. To go on record and say that, I think that’s a bunch of (expletive). I’m the type of fighter that steps up and fights anybody, anytime, anyplace. I’ve taken short-notice fights for him. I always do whatever I’m asked.”

So why does White say Koscheck is “not a team player?” Most likely it has to do with the much publicized fact that he and fellow welterweight and American Kickboxing Academy teammate, Jon Fitch, have refused to fight one another. It could also go back to the days when a few of the AKA fighters had some initial issues with signing away their ancillary rights for the UFC video game (they even fired Jon Fitch for it).

Koscheck goes on to say he is going to prove to White he is a team player:

“I’m going to prove I’m a team player by winning the show and the welterweight title.”

It seems a bit questionable how that would prove he is a team player though, and until the day comes when Koscheck and Fitch face off in the Octagon, White would likely still take issue with the cotton-top brawler.