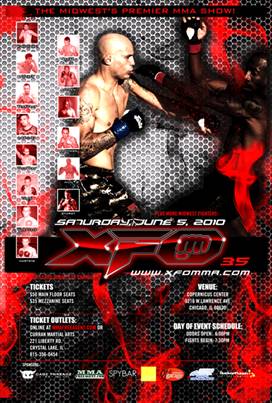 Chicago, IL (USA): The Xtreme Fighting Organization (XFO), one of the most respected MMA promotions in existence, has announced today their fight card for their upcoming fight event.

On June 5th, MMA is overtaking the Copernicus Center in Chicago as fight fans will be treated to nine professional fights and four amateur bouts. Headlining the event are welterweight veterans Keith Wisniewski (25-12-1) and Ted “Red” Worthington (27-20).

Wisniewski is coming into this fight on a three-match win streak, and he hasn’t allowed an opponent to go the distance during that span, winning two bouts by submission and one by TKO (strikes).

Worthington has had an active year in 2010 thus far, fighting three times within the first four months and earning two victories, one by submission and one by knockout.

Each warrior has proven throughout his career that he will fight his heart out to win, so fans can expect an epic battle when these two meet.

In what may be the fight of the night, Matt Tobie (2-0) and Kevin Nowaczyk (5-0) will both put their undefeated records on the line as they face off with one another.

Also on the main card will be a fight at 155 lbs. as the very experienced Ryan “Bones” Bixler (15-7) will battle grappling wizard Jonatas Novaes (4-3). Novaes is known as a submission specialist, while “Bones” is more of an all-around fighter. Regardless, both fighters will look to impose their will on the other.

The full card is as follows:

The amateur card features hungry up-and-coming fighters as well as future stars looking to shine as they put their futures on the line.

XFO—the Midwest’s premiere MMA show— features the best up-and-comers in the Midwest circuit and young fighters from all over the United States will look to hone their skills in the XFO cage.

Tickets for the event are on sale now for $50 for Main Floor Seats and $35 for Mezzanine Level and are available for purchase by visiting http://www.xfomma.com/. Doors open at 6:00 PM, and the fights will begin at 7:30 PM.

Information on the pre-event press conference and weigh-ins will be made public soon, as well. The Xtreme Fighting Organization is sure to electrify local fight fans so purchase your tickets now before the event is sold out!