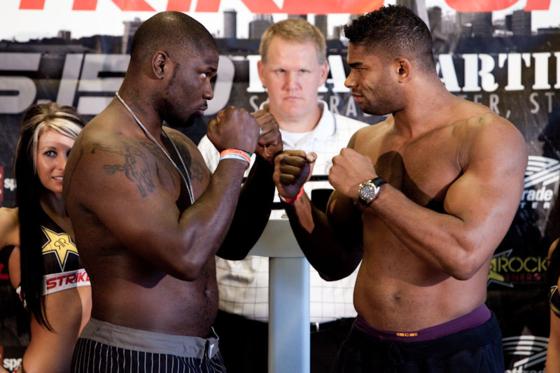 Rogers had no answer for the top game of Overeem, as “The Demolition Man” patiently landed knees to the body from side control, then alternated to short hammerfists, along with elbows to the body of Rogers.  Overeem continued to apply pressure, and at about 3:40 into the first round, Overeem launched an all out assault, landing over 20 straight unanswered punches to the face of Rogers, forcing referee “Big John” McCarthy to step in and call a stop to the bout.

The next step for Overeem almost has to be Fedor, but it will likely take lengthy negotiations to make this dream match-up for MMA fans a true reality.  Overeem shared his thoughts on Fedor after being asked who he would like to face next.

“Fedor Emelinanenko,” said Overeem.  “His management declined for him to fight me tonight.  Respect for Brett, because he stood up and was willing to fight me like a man, and now it’s Fedor’s time.”

That bout will likely be the biggest heavyweight match up of all time if it can get signed and takes place in the future, and is a bout that many hardcore MMA fans have been clamoring for the past several years.

“Bigfoot” Silva stuck to a smart gameplan the entire fight against Andrei Arlovski, utilizing a straight, stinging jab, and very effective counter punching to confuse and disrupt the rhythm of “The Pitbull.”  Silva tested the chin of Arlovski early and often in the first round, landing several flush punches to the jaw of Arlovski, but was unable to really hurt the former UFC champion, on his way to winning the first round.

Silva continued to outbox Arlovski for the remainder of the fight, frequently clipping the former UFC champion with counter punches as Arlovski continued leaving his hands after throwing punches of his own.  The fight would go to the judges, with Silva being awarded the victory via unanimous decision, improving his record to 14-2 overall and 1-1 in Strikeforce.

“Jacare” improves to 12-2 with UD victory over Villasenor

This fight was a classic match up, boxer vs. grappler, and despite how close the broadcast team thought the fight was, it was “Jacare” that was able to establish his will throughout, en route to a unanimous decision victory over Joey Villasenor.

The first two rounds saw Souza repeatedly take Villasenor down to the mat, and despite Villasenor’s ability to scramble back to his feet, “Smokin’ Joe” was never able to truly stay in the pocket and land the big, heavy-handed strikes that he is known for.

The fight seemed poised to turn in the 3rd round, as “Smokin’ Joe” was able to land some big punches as Souza visibly tired, but he was still unable to mount any sustainable attacks on his feet, as “Jacare” continued to put him on his back.

Gracie came into the cage rocking plain black shorts that made him look like a pick-up basketball player got lost and suddenly found himself in the middle of an MMA cage.  Like many of the Gracie’s however, looks are often very deceiving.

The first round was pretty insignificant as both guys looked to establish range and pace, feeling out each other for much of the first stanza.  The second round however, would prove to be a Gracie jiu jitsu clinic, after Gracie landed a brain-rattling knee from the clinch that dropped “The Monster.”

Once the fight hit the ground, Gracie quickly transitioned to side control, then to full mount.  Gracie wasted little time in going for an arm triangle attempt, but Randleman was able to scramble out, but gave up his back in the process.  With 1:55 to go and with Roger on his back, Randleman found himself in deep waters, fighting off continuous RNC attempts from Gracie, all while a very tight body triangle was locked around his midsection.  It was only a matter of time before Gracie finally secured the choke deep under Randleman’s chin forcing the tap.

Antwain Britt came into this fight having never been KO’d by strikes, and early on it looked like he may walk out of the cage with a KO of his own.  Britt started fast and furious landing the more significant strikes on his feet, while “Feijao” remained patient and looked to wear down the big man with a punishing clinch game.

After a stall in the action against the cage, “Feijao” moved forward and threw a kick, then launched and landed a flush overhand right hand, staggering Britt.  “Feijao” continued the onslaught, putting together a 5 punch combo that put the “Juggernaut” out cold.  The first round KO moves “Feijao” to 9-2 overall and 2-1 in Strikeforce.