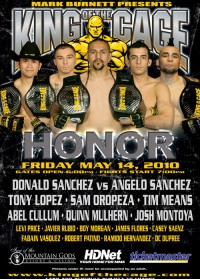 In the main event of the evening, King of the Cage Light Heavyweight Champion Tony “Kryptonite” Lopez (18-3) puts his title on the line against Mike Kyle (15-7-1). Lopez is looking to rebound from his first loss in over two years after being upset by Tony Johnson for the King of the Cage Heavyweight title in his last outing. He faces what might be the toughest test of his career in the form of Kyle, who enters this bout on a three fight winning streak, eager to capture his first title.

The KOTC title will also be on the line in the Flyweight division as Abel Cullum (17-3) defends his title against Josh Montoya (5-3). In the Bantamweight division, Angelo Sanchez (8-2) defends his title against interim champion Donald Sanchez (19-10) in a rematch that has been more than a year in the making. Both men enter the bout riding winning streaks of six and four fights, respectively.

“Lopez has an opportunity to rebound quickly in this high profile, televised fight,” said Andrew Simon, CEO of HDNet Fights. “I am also looking forward to Gaston v Schoonover which will lead to the winner getting a shot at the King of the Cage Heavyweight champion.”

In other action on the LIVE card, KOTC Welterweight Champion Quinn Mulhern (11-1) meets Joey Gorczynski (17-8) in a non-title bout, Sam Oropeza (3-0) faces off with Koa Ramos (6-1) in a battle of Welterweight prospects, and Nick “Afrozilla” Gaston (3-0) takes on Darrill Schoonover (10-1) in a matchup of Heavyweight contenders.