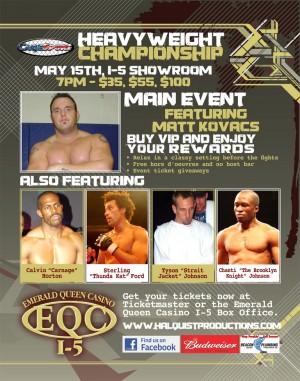 (Tacoma, WA) Brian Halquist Productions brings the Northwest’s favorite combative sports event back to the Emerald Queen Casino for CageSport MMA on Saturday May 15. The doors open at 6pm and the first fight is scheduled for 7pm. This show will feature a talented mix of fighters including many from the Pacific Northwest.

The main event features Tacoma’s own Matt “The Attack” Kovacs (4-3) who will fight Corey Williams (5-2) for the Heavyweight CageSport Championship. Kovacs, who trains with Arlington Kickboxing Academy was featured at Strikeforce: “At the Dome,” back in 2008. His brawling style and persistence in the ring make for exciting action every time Kovacs faces an opponent. He has the ability to escape from tight situations in order to come back and then dominate the fight. Williams comes from a boxing background and takes those skills, including powerful punches, to the cage.

In the co-main event, Tyson “Strait Jacket” Johnson (4-0) will face Patrick Prescott (1-0) in what promises to be a great fight. Back in February of this year, Johnson improved on his already perfect record by securing a guillotine choke at 4:38 in the first round. With his strait jacket clad entrance and performance both in and out of the ring, Johnson is bound to put on a great show. Keep an eye on Johnson after his fight, he may startle the audience by pulling out one of his few remaining teeth.

Also on the card will be crowd favorites, Calvin “Carnage” Horton, Chanti “The Brooklyn Knight” Johnson, and Sterling “Thunda Kat” Ford in three separate fights. These three fighters have all fought at the Emerald Queen Casino and have met with success on numerous occasions. Horton brings excitement to the cage when he fights and keeps the crowd on their feet. Johnson’s aggressive style makes him a crowd favorite; his enthusiastic celebrations also give fans something to talk about. As for Ford, he is able to maintain great composure during his fights, and has great stand up and floor skills. All three fighters will help to keep fans on the edge of their seats.

These fights highlight an explosive MMA event that will be capped off by the Heavyweight Championship fight. The winner will join Lightweight Champion, Lloyd Woodard, as CageSport MMA champions.

Available at the Emerald Queen Casino box office 1-888-831-7655 and at all Ticketmaster outlets. Or online at www.ticketmaster.com

Get up to date information at: www.Halquistproductions.com

Where: Emerald Queen Casino’s I-5 Showroom