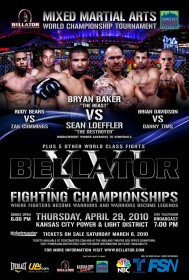 KANSAS CITY, Mo. – The 16 fighters participating in Thursday’s Bellator 16 event at the Kansas City Power & Light District weighed in this evening. All fighters made weight with the exception of Rudy Bears who was 2 lbs. over the welterweight non-title fight limit of 171 lbs.

Bellator 16 will air live on Thursday April 29 on FOX Sports Net beginning at 7:00 p.m. CT. ProMMAnow.com will provide live results and play-by-play commentary during the broadcast.

The main event features a first round middleweight tournament match-up between WEC veteran Bryan “The Beast” Baker (11-1) and Sean “The Destroyer” Loeffler (14-3), a King of the Cage and Gladiator Challenge veteran currently on a six-fight win streak.

Baker has won his last five fights. The only blemish on his record was a unanimous decision loss to the UFC‘s current number one middleweight contender Chael Sonnen.

The official results of the weigh-in are as follows: