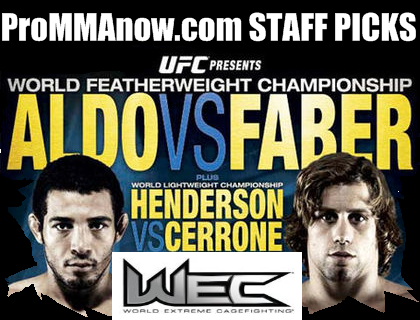 It’s that time once again. The ProMMAnow.com staff has come together to make their predictions on “WEC 48: Aldo vs. Faber”. It’s World Extreme Cagefighting’s very first pay-per-view card so they really stacked it. WEC events are known for their fast-paced action and excitement, and on paper at least, this looks to be their best card ever put together.

Can Faber regain the title in front of his home crowd? Will the Cowboy get revenge against Ben Henderson? Will Manny Gamburyan be able to stop the powerful Mike Thomas Brown? These are the questions, and we try to give you the answers.

BRIAN FURBY: This should be an excellent fight. Hell, the whole card looks to be a great one as the WEC has pulled out all stops for their first pay-per-view outing. Aldo is a favorite with the odds-makers, but I think this is Faber’s comeback fight. Faber possesses the speed and explosiveness that some of Aldo’s previous opponents have lacked, and putting these two in the cage together guarantees some big fireworks. As long as Faber can stay outside of some of Aldo’s flying knees, his wrestling skills will allow him to shut Aldo down on the ground en route to a tough-fought decision. Faber wins via split decision.

DENNY HODGE: Faber has the speed to deal with Aldo, but even Mike Brown’s wrestling couldn’t slow down the red hot Aldo. I just don’t see any scenario that gives Faber a chance to win this fight unless he can grind it out for a 5 round war. I’m not sure that’s possible with Aldo’s striking and I think he defends his title by TKO in Round 3.

RICHARD MANN: Watching Urijah Faber’s last fight against Raphael Assuncao only cemented his status as an underdog against Jose Aldo. Faber can’t close the distance without jumping at his opponent. He is extremely hittable on the feet. Despite coming from a wrestling background his is often bullied in the clinch. Aldo will have the advantage on the feet, and should be able to use his footwork to stay away from Faber’s takedown attempts. Aldo by decision.

JACK BRATCHER: Faber fighting in his hometown is always nuts Faber is better than 98% of the featherweights out there, but Jose Aldo is better than all of them. Faber will make the mistake of trying to stand with Aldo just long enough to get chalked up as his seventh knockout in a row. Aldo by first or second round KO.

BRIAN FURBY: The WEC may have to hand out two Fight of the Night bonuses on this card once Faber/Aldo and Henderson/Cerrone are through. In what was an excellent first fight, Cerrone looks to rebound from a unanimous decision loss to Henderson in ’09 that many people listed as a Fight of the Year candidate. Although Henderson’s dominant victory over former WEC LW champ Jamie Varner makes me wonder whether he’s improved enough to best Cerrone in a second bout, I think Cerrone is poised for a comeback. The second meeting of these two fighters will be just as entertaining as the first, but this time Cerrone will get the nod on the decision win. It will be close, but definitely not the type of five-round fight that fans wish would end early. Cerrone wins via split decision.

DENNY HODGE: The first time around was a classic battle. Henderson seems like he’s in deep trouble with submissions at times, only to work free from positions that would finish most fighters. Cerrone is going to have to try to break through with his stand up, because it seems impossible to submit Henderson. That being said, I believe this one will once again go 5 rounds because neither guy is going to quit in this one. Henderson via decision.

RICHARD MANN: Donald Cerrone really should have gotten the decision in the first fight. On top of that, he has to know now that all Henderson wants to do is look for submissions and takedowns. Even though Cerrone is to takedown defense what anorexics are to the KFC Double Down, he is going to take this fight. Let’s hope the judges do not give another one away. Cerrone by decision.

JACK BRATCHER: This fight is hard to call because both guys are so good. However, I think it’s about time for Cowboy to whip off another submission. It’s almost impossible to submit Henderson, but I think  Cowboy will pull it off this time. Cowboy by third round submission.

BRIAN FURBY: Brown is too much for Gamburyan. In spite of the fact that 4 of Brown’s 5 losses come from submissions, and Gamburyan has some decent submissions, the fight probably won’t even make it to the ground unless it’s because Brown KO’s Gamburyan and moves in before the ref can stop it. Manny is a solid fighter, but he’s outclassed here. Brown wins by KO in Round 1.

DENNY HODGE: I see Gamburyan trying to get Brown down and on his back with both his judo, and traditional takedowns.  He won’t be successful although it will be a back and forth affair.  Brown by decision.

RICHARD MANN: Two stocky guys who rely on their wrestling game to grind on opponents. Mike Thomas Brown will be the bigger fighter and better wrestler. Also, interestingly enough, Brown might be able to win this one on the feet since Manny Gamburyan has a crippling lack of reach. Brown by decision.

JACK BRATCHER: Mike Thomas Brown by TKO round one. As the number two featherweight in the world, Manny is outmatched in this one. Brown stopped Faber with strikes in their first match-up and I see him being able to do the same to Manny. Manny wings those haymakers and Brown’s Howard Davis Jr. boxing technique should easily out-strike the Armenian munchkin.

BRIAN FURBY: In what is said to be the match-up for the number #1 contender spot for the winner of Aldo/Faber, this is going to be a night that will see Njokuani pick up yet another Knockout of the Night bonus. Roller may be able to take Njokuani down, but the fight won’t stay on the ground for long, and once the two make it back to their feet, Njokuani will show why he’ll be the one getting the next shot at the belt. Njokuani wins via KO in Round 1.

DENNY HODGE: Njokuani has been dynamic and dangerous, winning 5 of his last 6 fights by KO or TKO. His 2 losses on his resume have been by submission, and Roller has a great guillotine. This one will be stalemate for most of the fight, with Njokuani getting the nod via decision.

RICHARD MANN: I have written a column called “Team Takedown for life,” so I might appear a little bit biased. However, with that said, Shane Roller should be able to win this fight. Anthony Njokuani looked great smashing Chris Horodecki, but he has not had enough time to master a serviceable wrestling game. Roller by submission.

JACK BRATCHER: Both guys last loss was to Ben Henderson, Roller by TKO, and Njokuani by submission. This is a very interesting match-up. I’m going to go with Njokuani and say his striking will be too much. He should be able to survive Roller’s attempt to get him down and finish it, and I think he’ll KO him in the process.

BRIAN FURBY: Another rematch on the card, and another exciting fight. Jorgensen has improved more than enough since their first match to pick up this win this time, and given his hand speed, should be able to stun Banuelos enough to pick up a first-round TKO or submission victory. Jorgensen wins via submission in Round 1.

DENNY HODGE: Jorgensen has won three straight since his split decision loss to Banuelos back in June of 2009. He has said in interviews that it will not go to the judges this time around and I believe him. Jorgensen gets the TKO in this one.

RICHARD MANN: In their first fight Scott Jorgensen should have gotten the decision. Since then he has improved his overall MMA and focused on actually have a game plan. Antonio Banuelos might be able to land some strikes on the feet, but this is Jorgensen’s fight to lose. Jorgensen by decision.

JACK BRATCHER: Remember in his last fight when Jorgensen picked Chad George off the ground with a guillotine choke and his feet were dangling in the air? That won’t happen to Banuelos. Even though he’s 5 foot 3 inches and Chuck Liddell’s gopher, there are some perks to that job, one of them being able to work with one of the sport’s legendary strikers. Banuelos by decision.

BRIAN FURBY: Coming off a draw and a loss in his last two fights, Garcia looks to make a statement and start working his way back into the title picture. This will be Jung’s first fight in the WEC so clearly he’ll be wanting to make a statement of his own. This fight will likely stay a standup battle for three rounds, with Garcia working to quickly get off the ground if Jung manages to take him down. Garcia will use his advantage on the feet to keep it an exciting fight that will probably go the distance. Garcia wins via unanimous decision.

DENNY HODGE: It’s hard to pick against a guy with a cool ass nickname like “The Korean Zombie.” But, I just can’t bet against Garcia… I have pulled for him ever since he fought Huerta, and I’m going with him again. Garcia by decision.

RICHARD MANN: I am not sure when it happened, but Leonard Garcia is now just a slugger. He last two fights have been absolutely dreadful. That game plan will not work for him in this fight. Chan Sung Jung is also a brawler, and he also has a Zombie-like chin. He takes shots and keeps walking forward. Look for the two fighters to stand and trade. In the end Chan Sung Jung will be left standing. Jung by decision.

JACK BRATCHER: Garcia needs a win and he should be able to get one against Korean Top Team’s Chan Sung Jung. The Sengoku veteran is making his WEC debut after going 10-1 in Japan and Korea. His game is mostly wrestling and submissions. Garcia will stuff and crush (similar to sprawl and brawl) , and should be able to end the fight by the second round via TKO.