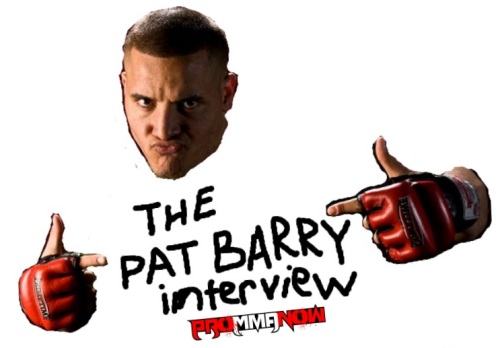 When it comes to exciting fights, it doesn’t get much better than watching Pat “Get Hype” Barry (5-1) kick Dan Evensen’s legs until the man’s body flat out refuses to continue. Imagine someone taking a baseball bat and slamming it into the meat of your thigh, and you will get an idea of the kind of power this man possesses in his kicks.

It’s the new breed striker vs. the seasoned warrior… the man who’s seen it all vs. the rising star. ProMMAnow.com spoke with Barry this week about the upcoming fight. I wanted to see what it was like for Barry, who has made his name as striker, fight someone considered a legend doing what he does. “Get Hype” never disappoints.

ProMMAnow.com: Thank you Pat for talking with us today at Pro MMA Now (www.prommanow.com). Are you the type of guy that is always in the gym, or you do like to take time off between fights and do other things, and what have you been up to since your last fight?

PAT BARRY: I’m always in the gym, but not like a training maniac. I love training and loving new things. I love what I do and when not in a training camp, I find it easier to learn techniques, cause I’m doing it for fun, not cause I have a fight. Also, I’m always there for my teammates. We’ve got different levels of fighters at our gym so we don’t all fight at the same time. I’m always available for my gym family!

ProMMAnow.com: You knocked out Antoni Hardonk back in October at UFC 104 and won “Fight of the Night” and “KO of the Night” for your performance. That was a pretty big deal for you wasn’t it? Could you talk a little bit about how important that fight and bonus money was for you?

PAT BARRY: Well, I’m sure the world has read the story or at least heard the rumors, but those bonuses couldn’t have come at a better time. And all it was, was a testament to all the hard work and sacrifice I’ve put in. And the best part of it to me was that if it happened once, it could happen again, but for me the win against such a highly skilled guy that I look up to and respect was the reward.

ProMMAnow.com: Your next fight is scheduled for UFC 115 in June. That will be about an eight month layoff by the time you get back in there. Do you like having that long off, and how many fights would you like to get in by the end of 2010?

PAT BARRY: I don’t mind fighting a lot or a little. I’ve never felt ring rust no matter how long away from the ring I am. And I wouldn’t mind having two or three fights by the end of the year.

ProMMAnow.com: At UFC 115 on June 12 in Canada you will be fighting Mirko Cro Cop. As a striker yourself, I would imagine this is a pretty big deal for you. For many strikers Cro Cop is viewed as almost a demi-god. Do you hold that type of respect for him, or how do you view Cro Cop, have you been a big fan of his over the years?

PAT BARRY: 10 years ago when my brother and I were watching K-1 on TV, before I had even started training, I had him on my list of guys I would never want to fight ever. He is a living legend. His name will be remembered for the rest of time like Michael Jackson, Michael Jordan, Tyson, Obama. I am honored to have my name in the same sentence as his, and I’m hoping to get his autograph either before or after the fight, regardless of the outcome.

ProMMAnow.com: How do you see yourself matching up with Cro Cop, and what aspects of your game will likely give him problems?

PAT BARRY: I think I’m a great match for him since we are both strikers, and my biggest strength is the fact that I’m not very known to him, not much footage to study, and because I’m still new I’m always improving on the spot.

ProMMAnow.com: If you look at his record, he hasn’t really had a significant win in quite some time. Do you believe he still has what it takes to compete in the UFC, or is he on his way out?

PAT BARRY: Anybody who believes Cro Cop to be on his way out or no longer dangerous can feel free to take my place on June 12th!

ProMMAnow.com: Who are some of the people who will be helping you prepare for this fight and will you be training with Duke Roufus as normal?

PAT BARRY: Duke is and will always be my coach, friend, brother. “Red” Schafer, Matt Mitrione, Ben Rothwell, and the entire Roufusport squadron!

ProMMAnow.com: Compare for us the UFC to the World Combat League… how do they match up if they were to fight? Who would win if Chuck Norris and Dana White fought right now, and how would they win?

PAT BARRY: That’s a tough question cause it’s two different fight sports. I guess it depends on the rules. Sorry for the boring answer. The UFC is the best, but not even me will cross Lord Norris!

ProMMAnow.com: Were you a big Chuck Norris fan growing up? Did you ever get to work out or spar with him when you were in the WCL? If so, what was that like? Did he ever “get served” by Pat Barry?

ProMMAnow.com: Any possibility of Pat Barry ever going to light heavyweight?

ProMMAnow.com: Thank you for your time Pat. I think you bring some great excitement to the heavyweight division, and really look forward to watching all your fights. This fight with Cro Cop could be epic. So, best of luck, and hopefully we can catch up down the road. Are there any sponsors you would like to thank, or do you have any shout-outs?

PAT BARRY: Mom, New Orleans, HD Kids, USA Bridge Builders, Tapout, Harley Davidson of New Orleans, Suckerpunchent.com, Roufusport, Cooter Browns, Brewskis, St. Augustine, Sagat, and you for giving me the opportunity to get my thoughts out in the world!