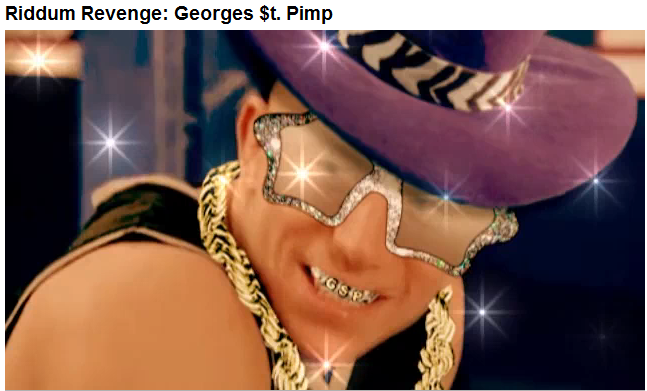 Lookoutawhale has pulled out all the stops in creating this definitive Georges St. Pierre mockumentary. Considered by women the world over (and theMadone) to be the sexiest fighter on the planet, this video shows why pimpin’ ain’t easy for the champ.

This pimpin documentary traces the origins of GSP’s pimpness back to his time as coach on The Ultimate Fighter when he first got lessons in pimpology from Shonie Carter. From there his stock began to rise (I said stock). As he won more fights, got in better shape, wore tighter and smaller shorts, his Riddum Meter rose to unprecedented levels.

There were rumors of lust-filled affairs with famous Hollywood actresses. Female reporters who had always maintained complete professionalism began to break out in sweats and fumbled interviews with Georges. Even certain female fighters began to question their own sexuality when gazing upon the sweat glistened champ in action.