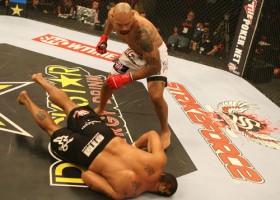 NEW YORK (Jan. 28, 2010)—Six months ago, Lavar Johnson lay in a hospital bed, clinging to his life after he was gunned down while attending a family barbeque during the July 4 holiday.  On Friday, March 26, the 32-year-old will enter a new chapter in his incredible recovery when he restarts his professional mixed martial arts (MMA) career in the main event of a STRIKEFORCE Challengers fight card at Save Mart Center in Fresno, California on Friday, March 26.

The heavy-handed Johnson (13-3), a 6-foot-4 inch, 250-pound resident of nearby Madera, will face off with another highly touted prospect, undefeated Lolohea Mahe (4-0-1) of Wailua, Maui in the STRIKEFORCE cage.

Tickets for the STRIKEFORCE Challengers event, priced from $30, go on sale on Monday, Feb. 1, at the Save Mart Center box office and select Save Mart Supermarkets, all Ticketmaster locations (800) 745-3000, Ticketmaster online (www.ticketmaster.com) and STRIKEFORCE’s official website (www.strikeforce.com).

“My health is great and I’m almost back to where I was,” said Johnson.  In his last start in the cage, Johnson crushed Carl Seumanutafa in just 18 seconds with a single punch at the first-ever STRIKEFORCE Challengers event at Save Mart Center on May 15, 2009.

After being struck down by the gunfire that also led to the death of a cousin, Johnson, a father of two boys, ages eight and five, spent one month in hospital care and lost approximately 60 pounds.

Months of physical rehabilitation followed and, one month ago, Johnson was cleared by a physician to return to training with trainer Jasper Tayaba and Team Buhawe in Fresno

“(The experience) made me realize how fragile life is and that every day I’m here is a blessing.  It has also made me take MMA more seriously.”

In other action on the STRIKEFORCE Challengers card, “Abongo” Humphrey (5-1) of Atlanta, Ga., will square off with George Bush III (5-1) of Columbus, Ohio, at light heavyweight (205 pounds).

Unbeaten Zoila Frausto (2-0) of Fresno will face off at 135 pounds with another one of the top prospects in the women’s field, Miesha “Takedown” Tate (7-2) of Olympia, Washington.

Save Mart Center doors will open for the STRIKEFORCE Challengers event at 6 p.m. PT. The first live, non-televised, preliminary bout will begin at 6:45 p.m.

STRIKEFORCE Challengers is a proving ground for up-and-coming MMA fighters. The series is designed to provide today’s top prospects with the opportunity to step-up their level of competition and demonstrate their ability in a nationally televised event.

premium cable television network.  The promotion made its live, primetime debut on CBS with the “Fedor vs. Rogers” mega-fight that it co-promoted with M-1 Global on Saturday, November 7

and generated 5.46 million viewers for the main event between the world’s number one heavyweight, Fedor Emelianenko, and superstar Brett “The Grim” Rogers.