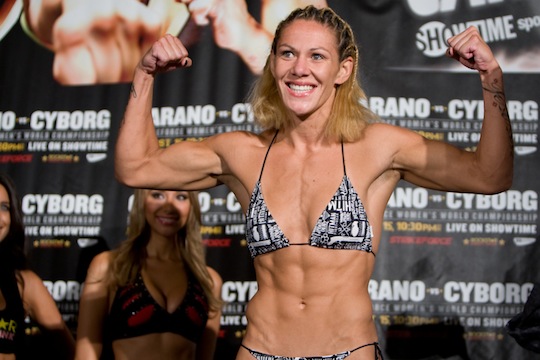 On Monday Cris “Cyborg” Santos, along with her lawyer, attended a meeting with the California State Athletic Commission in an effort to appeal a one year long suspension levied against her for the use of banned substances.

It may not come as a big surprise to many people that UFC Hall of Famer and “World’s Most Dangerous Man” Ken Shamrock (27-13-2) has used steroids. In fact, he was suspended last year for that very reason. However, it may come as a shock that he now finally admits it and is talking about it. … Read more

We reported to you late Tuesday evening that Kirill Sidelnikov, also known as “Baby Fedor,” had tested positive for the anabolic steroid Stanozolol during testing which took place at Affliction: Day of Reckoning when he fought Paul Buentello on January 24, 2009. Early Wednesday morning PRO MMA (promma.info) received the following statement from Sidelnikov’s management regarding the Russian’s steroid use and his subsequent suspension:

Immediately after the company was notified, an internal investigation was launched. As a part of the investigation, M-1 Global officials spoke with Kirill and asked him to explain his position.

Those who watched UFC 89 were bound to notice the improved physique of one Chris Leben. His main event bout against Michael Bisping was an inspiring performance where he looked calm and relaxed and constantly pushed the pace throwing the bombs he’s known for. However, Bisping out-pointed the Hawaiian transplant with a defensive, elusive and tactical gameplan.

Much ado was made recently about Leben maturing as a fighter and as a person. Gone are the days of the self-destructive alcoholic punker spritzing on the pillows of his fellow TUF cast members. “Maturity” was the new catch word for Leben. Apparently, he’s moved on and picked up some new more “adult” vices.