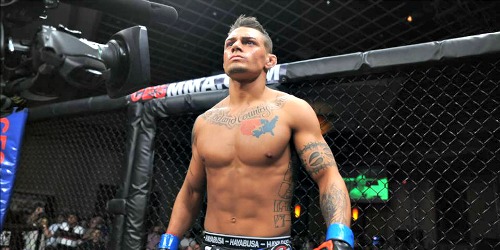 Before Kody Nordby tries to improve to 8-4 against David Garcia at CES MMA 41 at Twin River Casino in Lincoln, R.I., on January 27, LIVE on AXS TV Fights, the revitalized Rhode Island bantamweight spoke with Pro MMA Now. What did you take away from your five-round CES MMA Bantamweight Championship knockout loss to … Read more

UFC middleweight Jorge “El Conquistador” Rivera has emerged as one of the least likely candidates for the next season of American Idol, and many industry insiders are already predicting him to be among the finalists.

SOMERVILLE, Mass. (May 4, 2010) – Saul “The Spider” Almeida, who has compiled a perfect 8-0 record on the Boston-area regional circuit since turning pro less than 18 months ago, was the unanimous winner of an open tryout held earlier today by Bellator Fighting Championships, earning him the right to fight during one of Bellator’s … Read more

SOMERVILLE, Mass. – Are you a professional MMA fighter looking for a shot at the big time? On Tuesday, May 4, Bellator Fighting Championships will hold an open workout at Mark Dellagrotte’s Sityodtong Academy located at 100 Broadway, Somerville, Mass. 02145. The phone number at the academy is 617-625-7339. Driving directions can be found on … Read more

Here is the final installment of a special three part PROMMA.INFO exclusive. Mark DellaGrotte talks candidly with “Fast Eddie” Constantine about his relationship with Kenny Florian, his thoughts on Penn vs Florian and has some very kind words for his family, friends and fans.

Gurgel had originally been slated to fight lightweight champion, Josh Thomson. However due to an elbow surgery and an extremely hectic schedule, Gurgel was forced to postpone the fight. Rather than wait for Gurgel, Strikeforce went ahead and lined Thomson up with Gilbert Melendez, whom he will fight on April 11 in San Jose.

When he was cut from the UFC back in November 2008, Gurgel had signed with the Strikeforce promotion literally within minutes. Since that time, he has had an elbow surgery and has been to Brazil where he got some much needed rest and relaxation that involved eating a lot of mangoes and surfing.

Mark Dellagrotte was very proud of his student, Patrick Cote, after going two full rounds with the UFC Middleweight Champion, Anderson Silva at UFC 90. Dellagrotte talks about the background on Cote’s knee injury and also gives his thoughts on Silva’s performance. He thinks that Silva respected Cote’s power and he also had this to … Read more