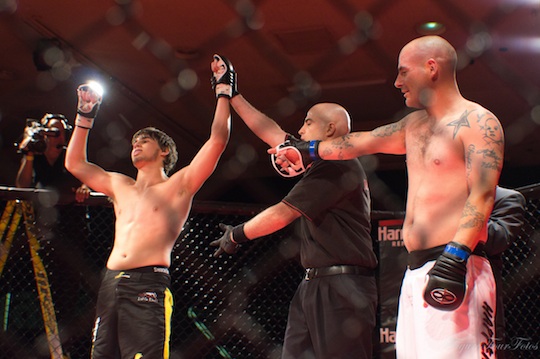 ProMMAnow.com’s Jack Bratcher talks with Sean Shamrock, the son of UFC Hall of Famer Ken Shamrock, about his recent fight, his Dad vs. James Toney and growing up Shamrock.

Sean Shamrock, the son of MMA legend and UFC Hall of Famer Ken Shamrock, made his professional MMA debut this past Saturday night with King of the Cage.

WAR GODS V takes place tonight, Saturday May 30th, from the Viejas Casino in Alpine, California.  PRO MMA (promma.info) will be providing live round by round updates and results during the event. You can watch all the LIVE MMA action through the online WEBCAST brought to you by PRO MMA (promma.info) in association with Go Fight Live beginning at 8:30 PM CT/6:30 PM PT.

Also on the card will be Muay Thai Champion Kit Cope (2-4) taking on undefeated Pancrase veteran Steve Magdaleno (5-0). Cope is most well known for being featured on MTV’s “True Life” on two separate occasions. His particular episode of “True Life” is one of the most successful and replayed episodes of any MTV show ever.

Other notable names on this card are Ryan Shamrock (1-1), son of UFC Hall of Famer Ken Shamrock, and MMA veteran David Gardner (16-11), who lost to Shinya Aoki at DREAM 7 earlier this year. Mark your calendars as PRO MMA (promma.info) will be providing access to a LIVE WEBCAST of “War Gods V” this Saturday night!

UFC Hall of Famer and MMA legend, Ken Shamrock will return to the cage on Friday, February 13. He will be fighting in the Valentine’s Eve Massacre in Fresno, California.

The event is being co-promoted by Ken Shamrock Productions and War Gods. Ken’s son, Ryan Shamrock will also be a part of the card.  Another young prospect expected to participate is Zoila Frausto.

Read moreKen Shamrock returns to the cage in February