We LOVED the first Creed movie and we waited patiently for a sequel announcement. When it came we were disappointed that Ryan Coogler wasn’t returning as the director until we saw the first trailer. We just watched the 2nd trailer and we have faith in its direction now without question and we think you will, too. Creed stars Michael B Jordan and Sylvester Stallone.

The first Creed movie starring Michael B Jordan was solid and the sequel looks to build on the momentum it gained as a critical and commercially successful hit. Jordan is back and he looks like he’s out to follow in his father’s footsteps even if it means going to his grave. We’re hyped and we’re seeing this day one. Check it out.

Rocky creator Sylvester Stallone gave his take on Floyd Mayweather Jr. vs Conor McGregor via Instagram. “(Conor) is long long shot but in fighting strange things happen. Floyd is going to be almost impossible to defeat! Good luck and be safe to both warriors.” Check out the video he included with it. WAR Conor!

Of course there’s going to be a music video. Stay tuned for the full length movie. Mayweather vs. McGregor is the spectacle of the age and it’s all going down on Saturday, Aug. 26 live on Showtime pay-per-view. ‘The Killers’ is a rock band and maybe you are familiar with them. I’m sure I’ve heard their music but I couldn’t name you one song and after watching this I understand why. I’m sure they were paid handsomely for this music video called “The Man”, which is not about some government conspiracy that wants to suck the life force from your every cell, but rather about who’s going to become “The Man” when McGregor and Mayweather slug it out in the boxing ring in less than a week. Both fighters are guaranteed to make in the nine figures, so technically they could both probably be called “The Man”. Though if Conor does indeed win, they may have to call Mayweather “The Old Man”. And we hear the Rolling Stones will be making that music video if the Irishman does indeed get it done.

Why do I feel like we’re in a Rocky remake and Sylvester Stallone is calling all the shots? 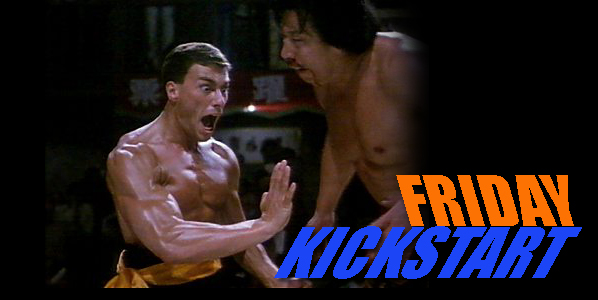 This Friday Kickstart features the original Rocky movie training montage in all its 1976 awesomeness. Watch it, learn it, laugh about it, and go kick some arse today.