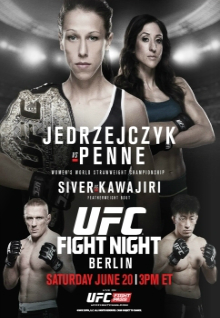 The UFC train keeps rolling this week when UFC Fight Night 69 takes place in Berlin, Germany, at the O2 Arena on Saturday, June 20. The event will be headlined by the UFC women’s strawweight champion fight between champion Joanna Jedrzejczyk and challenger Jessica Penne. This will be Jedrezejczyk’s first title defense since destroying Carla … Read more

Welcome to another edition of “Meet Your UFC Rookies.” This is one of our more popular segments here at PRO MMA© (promma.info) that many have imitated and well… a few have duplicated.

On the next three UFC cards, UFC 98, 99, and 100, there will be five fighters making their UFC debut. There is one rookie at UFC 98 – Tim Hague. UFC 99 has three newbies – Ricky Story, Peter Sobotta, and Todd Duffee. And UFC 100 has one – Yoshihiro Akiyama.

25-year-old Canadian, Tim “The Thrashing Machine” Hague, is a 6’4″ 260-pound heavyweight who has been fighting professionally since 2006. He has a record of 9-1 with his only loss coming by split decision to Miodrag Petkovic in 2007, and he avenged the loss a year later. He is on a four fight win streak and is the current Canadian King of the Cage Heavyweight Champion. Hague has 5(T)KOs, 2 Submissions, and 2 Decision victories. Hague graduated from the University of Alberta with a Bachelor of Education Degree and is a former school teacher. He will be looking to teach Pat Barry a thing or two when he makes his UFC debut at at UFC 98 in Las Vegas. Tim Hague Highlight Reel