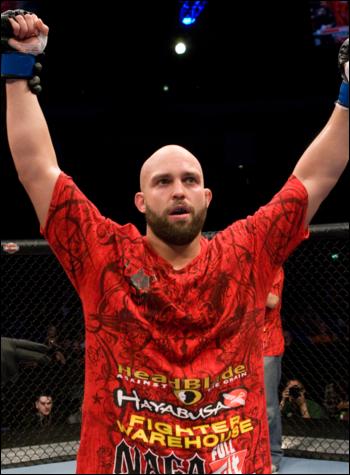 UFC veteran Mike Ciesnolevicz has been signed by Apex Sports Agency as well as the World Series of Fighting promotion.

Following recent announcements that include Efrain Escudero and Rolles Gracie, UFC and IFL heavyweight veteran Mike Ciesnolevicz (18-4-1) is the newest addition to the Shine Fights roster.

Shine Fight Promotions continues to add quality talent to their roster with the addition of heavyweight Rolles Gracie (3-1). Though not yet official, Rolles is expected to face UFC veteran Mike Ciesnolevicz (18-4, 1 NC) on Jan. 8.

Shine Fights will hold an event on January 8 featuring new signee and The Ultimate Fighter Season 8 winner Efrain Escudero, as well as a heavyweight bout between UFC vets Rolles Gracie and Mike Ciesnolevicz.

The ProMMAnow.com staff has come together again to share our thoughts and predictions for “UFC 119: Mir vs. Cro Cop,” which takes place this Saturday, Sept. 25 at the Conseco Fieldhouse in Indianapolis, Ind.

UFC and IFL veteran Mike Ciesnolevicz discusses his UFC stint, his release from the organization, and his decision to leave the Pat Miletich camp in this exclusive interview.

The “TUF 9 Finale” took place Saturday night at the Palms Casino Resort in Las Vegas, Nev. There were a number of preliminary fights not shown on Spike TV, including four fighters from “The Ultimate Fighter: U.S. vs. U.K.”

With two submissions and one TKO, the preliminary fights actually had more finishes than the main card. Four of the five fights on the main card went to the judges for decision.

The most controversial decision of the night had to be Melvin Guillard’s split decision win over Gleison Tibau. While Guillard seemed to have the advantage on the feet and landed some good shots, Tibau repeatedly took him to the ground, maintained more control, and dealt out some ground and pound. However, there is the old saying, “If you let it go to the judges, there is no one to blame but yourself.”

IFL veteran and UFC newcomer, Mike Ciesnolevicz took his most recent fight, which was at UFC 95 against Neil Grove, on about two weeks notice. Mike C. submitted Grove with a heel hook in just 1:03 of the first round. He was giving up six inches in height and about thirty pounds in weight to … Read more

Another Pat Miletich product made an impressive debut this past weekend when Mike Ciesnolevicz (17-3-1 NC) forced Neil Grove (7-2) to tap in just 1:03 of the first round due to a nasty heel hook. Miletich Fighting Systems has long been considered one of the top teams in MMA having produced such fighters and champions as Matt Hughes, Jens Pulver, Robbie Lawler and Tim Sylvia just to name a few. If you named all the fighters who came up through the Miletich System and have trained there from time to time it would read as a who’s who of MMA fighters.

At UFC 95 this past Satuday, Ciesnolevicz kept the ball rolling. While this was Ciesnolevicz’s first actual fight in the UFC, he is no stranger to the big time as he has often been a cornerman for other M.F.S. fighters in the past. Before getting his shot in the UFC, Ciesnolevicz was a mainstay for the now defunct IFL promotion. He went 5-3-1NC in the IFL and was a part of two championship teams as a member of the Quad City Silverbacks coached by Pat Miletich.

UFC 95 took place today in London, England. It is airing tonight in the U.S. on SPIKE TV. We here at PRO MMA (http://promma.info) will be bringing you the round by round results starting at 8pm CST / 6pm PST. In the UFC 95 main event Diego Sanchez makes his lightweight debut against the very tough and durable Joe “Daddy” Stevenson. Other highly anticipated fights on the card include Nate Marquardt vs Wilson Gouveia, Demian Maia vs Chael Sonnen, Josh Koscheck vs and undefeated UFC newcomer and Junior Dos Santos in his sophomore return to the Octagon.