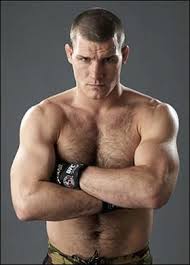 Here’s a rare look at Michael Bisping as he shows a British reporter from The Sun how it feels to spar with an Ultimate Fighter winner. He says Bisping is honestly the strongest person he’s ever met. Bisping shows off some of his patented boxing technique as well as takedown techniques. Pretty cool. Stay tuned to PRO MMA for more Michael Bisping content and be sure to check out the PRO MMA VIDEO VAULT for tons of exclusive content.

Michael Bisping’s next opponent will be Chris Leben at UFC 89 on October 18th in Birmingham, England. Bisping vs. Leben has the potential to go down in history as one of the great wars of MMA. Bisping recently moved down from lightweight to middleweight and after Bisping’s recent comments saying Anderson Silva’s reign will end, could Bisping be the one to take Silva to that place no other man in the UFC has been able? Video is after the jump.

Jason Day comes in to this match on a five-fight win streak. Michael Bisping is the hometown hero coming into this fight. They love “The Count” here in London. The cheers for Bisping were so loud on TV; I can’t even imagine how loud it must be in that arena. Bisping recently moved down from … Read more