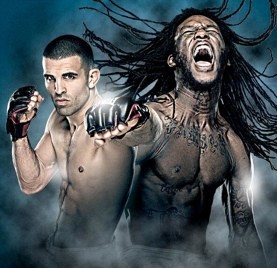 Bellator MMA returns to Canada Friday night with Bellator 119 featuring the Season 10 Featherweight Tournament Final and a showcase of local talent. Weigh-ins were held today at Casino Rama in Ontario, with tournament finalists Daniel Weichel and Desmond Green, as well as the rest of the main card participants, making weight without issue. Bellator … Read more

Rener and Ralek Gracie are back with another Gracie Breakdown. In this edition, the Gracie’s look back at the first ever reverse calf slicer submission in MMA as Charles Oliveira submitted Eric Wisely on the prelims of the UFC on FOX 2 event.

Strikeforce Challengers 18 takes place this evening at The Pearl inside the Palms Casino Resort in Las Vegas and features BJJ black belt Jorge Gurgel vs. Joe Duarte in the main event.

BJJ black belt Jorge Gurgel will face Joe “Hybrid” Duarte in a lightweight match-up in the Strikeforce Challengers 18 main event on Friday, Aug. 12, from the Pearl at the Palms in Las Vegas.

Strikeforce Challengers 18 is headed to Las Vegas. Lightweights Pat Healy and Eric Wisely is slated to be on the upcoming card.

Des Moines, IA – December 5, 2009 – MaxFightsDM has announced an event featuring two of the most recognized figures in MMA today. Ballroom Brawl IV will be held at the Val Air Ballroom on Friday, January 8 and features ten MMA bouts, including co-headline events that feature Josh Neer and Hermes Franca.

Josh Neer is clearly the most successful and popular fighter that has come out of Des Moines. The ten time UFC vets career started at the legendary Toad Holler in 2001 where he built an 89-1 amateur record before going pro, then on to defeat the likes of Joe Stevenson and Mac Danzig in the UFC.