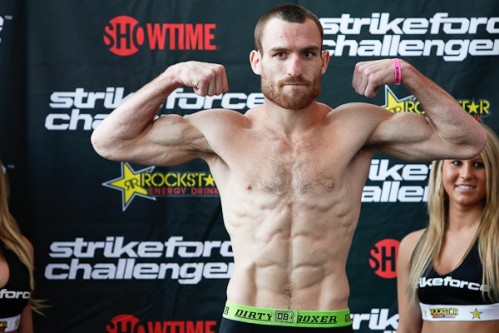 A lightweight fight between Pat Healy and Eric Wisely has been added to Strikeforce Challengers 18. The card, which has not been officially announced, is expected to take place Aug. 12 at The Pearl at the Palms Casino Resort in Las Vegas.

Healy made his mark on the sport when he upset Ryan Ford to claim the MFC welterweight title back in 2008. He followed that up with another victory over Ford. In 2010, he made his Strikeforce debut with a decision victory over Bryan Travers at Strikeforce Challengers “Lindland vs. Casey.” Since then, he has split a pair of fights. He fell by submission to former Strikeforce champion Josh Thomson, but then handed lightweight prospect Lyle Beerbohm his first professional defeat.

Wisely became known to hardcore fans after taking a pair of victories over former UFC title challenger Hermes Franca. Since his second victory over Franca, he has also defeated UFC veteran Matt Veach and Lance Wipf.

A lightweight bout between Jorge Gurgel and Joe Duarte is expected to headline Strikeforce Challengers 18.