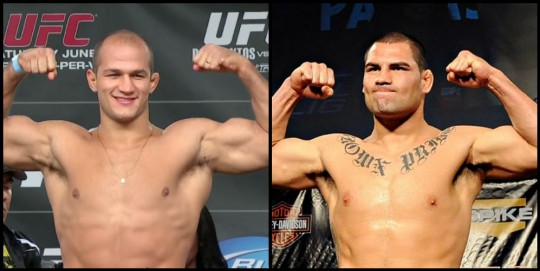 [ads1] Ahead of the rubber match this weekend here is the second installment of Junior Dos Santos versus Cain Velasquez. UFC 166 goes down this weekend in Houston headlined by these two men. JDS will look to get back the championship that was once his as Velasquez seeks to cement his legacy. Stay close to … Read more

The UFC’s March 21 card, which will be the UFC’s VERSUS debut, is stacking up to be a barn-burner. The UFC today announced the addition of Gabriel “Napao” Gonzaga (11-4) vs. Junior “Cigano” Dos Santos (10-1) to the card, in a heavyweight showdown that is practically guaranteed not to go the distance.

Gonzaga, now going on his fifth year with the promotion, is coming off a first round TKO victory over Chris Tuchscherer at UFC 102 back in August. It was a much-needed comeback fight for Gonzaga who had been knocked out in his previous fight with Shane Carwin at UFC 96.

Gonzaga has often been hit or miss in his UFC career, but when he hits, he hits hard, and when he connects, it is usually a short night for his opponents. Gonzaga will have to bring his A-game if he wants to get past young Brazilian up-and-comer Junior dos Santos.

Today’s “UFC 108: Evans vs. Silva” fighter weigh-ins took place at the MGM Grand in Las Vegas, Nev. All fighters but one made weight. Paul Daley weighed in at 172 lbs. on his first attempt, and then was still over the limit after removing his shorts. If he is still over weight after being given some additional time, he is required to forfeit a percentage of his purse to his opponent Dustin Hazelett. Because it is only one pound, he will likely make the weight.

Dan Lauzon and Cole Miller had an intense stare down and exchanged words. That is one fight you do not want to miss. It is one of two preliminary bouts that will be shown on Spike TV Saturday night beginning at 9pm ET/6pm PT.

BRIAN FURBY: In spite of the fact I wish that one of the other 12 original main event match-ups were still going down, I’m looking forward to this fight. Both guys are quick strikers with good power and have solid all-around games. I think Silva packs more power, but I do think Rashad has a slight edge on speed and technicality while also being more elusive. I don’t think the fight is likely to hit the ground – both guys want an impressive victory to get another shot at Machida, and Rashad also has the added factor of still wanting a piece of Rampage. I think the first round will see a lot of range-testing and maybe some quick flurries where one or both guys look in danger, but in the end, I see Rashad finishing it about halfway through the second. Rashad by TKO in Round 2.