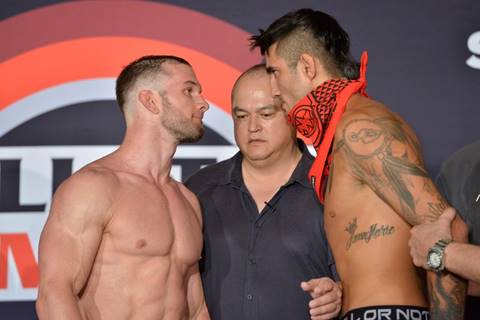 His 2010 Strikeforce run started in Nashville and he will start 2011 the same way. Ovince St. Preux will step back in the cage for the third time in seven weeks to face Ron “Abongo” Humphrey.

Ovince St. Preux finished off his 2010 MMA season a few weeks early, going a perfect 6-0 this year, by dominating Benji Radach to open up the main card on Showtime.

Ovince St. Preux has had a busy 2010. His sixth fight of the year will take place tonight as he kicks off the “Strikeforce: Henderson vs. Babalu” main card live on Showtime against Benji Radach.

Fresh off his fifth straight victory less than two weeks ago, former University of Tennessee linebacker Ovince St. Preux will re-enter the cage to face Benji Radach this Saturday, Dec. 4.

Benji Radach and Chris “Lights Out” Lytle join Bas Rutten and Kenny Rice this week on HDNet’s “Inside MMA.” The gang previews “UFC 114: Rampage vs. Evans” which takes place Saturday night, May 29, at the MGM Grand Garden Arena in Las Vegas. Ron Kruck talks with Dan Miller, who will be facing Michael “The … Read more

It was announced last week that Scott “Hands of Steel” Smith would be fighting Nick Diaz on the “Strikeforce: Lawler vs. Shields” card on June 6th in St. Louis, Missouri. Both fighters are coming off big TKO wins from Strikeforce’s April 11th card.

Immediately following the announcement, PRO MMA (promma.info) invited Scott to be a guest on our weekly podcast THE INFO. The following interview was transcribed from Scott’s appearance on the show.

Scott talks about his recent win over Benji Radach and why he feels it was the biggest win of his career. He also breaks down his upcoming fight with Nick Diaz, how the two match up, how he feels about going into this next fight so quickly, and much more.

The San Jose-based MMA promotion, STRIKEFORCE heads east to St. Louis, Missouri on June 6 with STRIKEFORCE: LAWLER vs. SHIELDS. It will only be the promotion’s third time since their March 2006 inception to hold an event outside the state of California.

PRO MMA (promma.info) was notified by the company today that Stockton bad boy, Nick Diaz will be fighting Scott “Hands of Steel” Smith in a special 180-pound catch-weight bout on the June 6th “Lawler vs. Shields” under card. The event will air live on Showtime from the Scottrade Center.

Both Diaz and Smith, are coming off impressive victories from STRIKEFORCE’s April 11th Showtime debut. Diaz fought “The Legend” Frank Shamrock in a one-sided main event beat down that left Shamrock crumpled against the cage and unable to continue 3:57 into round number two.