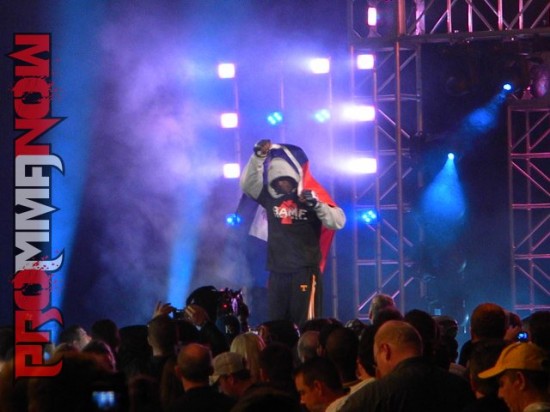 Ovince St. Preux finished off his 2010 MMA season a few weeks early, going a perfect 6-0 this year, by dominating Benji Radach to open up the televised main card on Showtime at last evening’s “Strikeforce: Henderson vs. Babalu” card.

St. Preux, a fast-rising contender in Strikeforce’s light heavyweight division, punished the heavy-handed Radach for most of their three round affair, nearly finishing off Radach in the first round with dozens of unanswered blows from a dominant top position after flattening out his opponent.

The referee let the fight continue, although most observers felt the fight should have been stopped in the first, but despite the fight going on, Radach had no answer for the reach and power of St. Preux.

“OSP” as Scott Coker calls St. Preux, dropped Radach at the beginning of the second stanza, and once again, Radach found himself desperately defending against St. Preux’s ground and pound.

Radach finally let his hands go in the third, but after connecting on a couple of shots that seemed to stun St. Preux, Radach went to the clinch, and looked for take downs for much of the rest of the round. A late take down for Radach did little to improve his performance in the eyes of the judges, who handed St. Preux a lopsided unanimous decision victory with scores of 30-27, 30-26, and 30-25.

At the post-fight press conference, Scott Coker brought St. Preux up to discuss his standing within the division, but cut short any questions from the media regarding his performance: