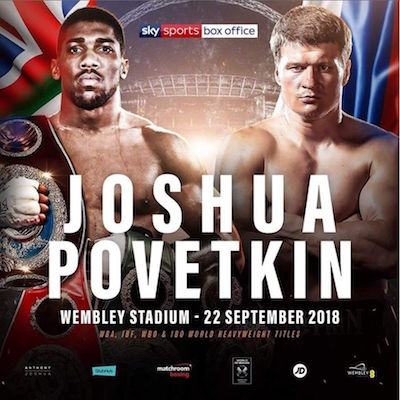 Anthony Joshua will put his unbeaten 21-0 record and his WBA (super), IBF, and IBO heavyweight titles on the line when he faces Russia’s “White Lion” Alexander Povetkin (34-1) on Sept. 22 in his home country of England.

Joshua went the distance for the first time in his career back in March with a unanimous decision over Joseph Parker to claim the WBO title. And in 2017 Joshua scored TKO victories over Carlos Takam and Wladimir Klitschko.

Povetkin’s lone career loss came via unanimous decision against Klitschko back in Oct. 2013. But since then the Russian has won eight straight, including six by knockout. Povetkin last fought in March when he scored a fifth round knockout over Daivd Price.

Oddsmakers have Joshua an enormous -1600 favorite, while Povetkin is the massive underdog at +800.

At six-foot six-inches Joshua has a four-inch height advantage over Povetkin. He also has a seven-inch reach advantage at 82-inches. This could be a real factor in the fight as Klitschko, Povetkin’s only loss, is the same height as Joshua and has a one-inch shorter reach.

Let’s also not forget Joshua is in his prime at only 28-years-old, while Povetkin is 39-years-old. With all but one of his fights being won by knockout, with a massive height, reach and age advantage, there’s a reason Joshua is the heavy favorite. But will it go the distance or will Povetkin be able to withstand the damage from the Brit?

As far as prop bets go, oddsmakers seem to be predicting it to go at least six-and-a-half rounds (-170) with +260 odds that it goes the distance. We’ll find out on Sept. 22 if the 2012 Olympic gold medalist can keep his unbeaten streak alive and get back to his knockout winning ways.