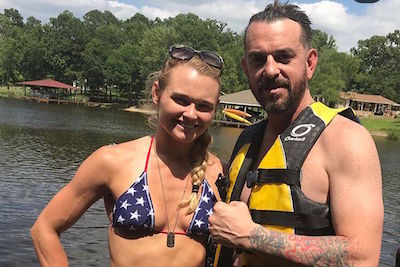 Andrea Lee just recently had to try and defend her husband Donny Aaron for having Nazi related tattoos. Along with the tattoo controversy on his resume he also served prison time for negligent homicide. The kicker? Donny was a police officer at one time.

A witness to the alleged assault named Andy Nguyen is apparently going to be giving a statement according MyMMANews of what exactly went down on that August 4th night.

He was trying to choke her, but she was defending herself well. She didn’t get beat up bad. The police did take pictures of marks on her neck. Wasn’t bad this time. No black eyes or anything but he has hit her before. I just wasn’t there. He was my coach and my friend. This was the first time this was in presence and I was not going to let this fly.

The accounts include anything from punching, strangling, and Donny trying to burn her with a cigarette.