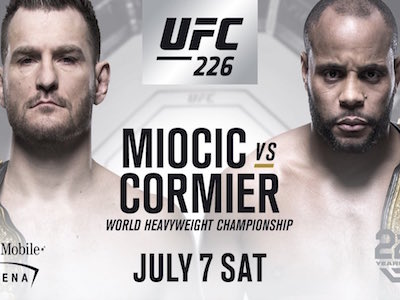 This weekend will feature one of the best cards in mixed martial arts history as undisputed UFC heavyweight champ Stipe Miocic puts his belt on the line against current light heavyweight champ Daniel Cormier in a champion vs. champion showdown in the UFC 226 main event in Las Vegas. The event will be held Saturday, July 7 at T-Mobile Arena and will air live on pay-per-view at 10 p.m. ET. Preliminary card bouts will air on Fox Sports 1 at 8 p.m. ET, with the early prelims streaming on Fight Pass starting at 6:30 p.m. ET.

In addition to the heavyweight title being on the line at UFC 226, featherweight champion Max Holloway will put his belt up for grabs against unbeaten phenom Brian Ortega in the co-main event. The pay-per-view card also features a heavyweight battle between hard-hitting behemoths Francis Ngannou and Derrick Lewis, a lightweight matchup between Michael Chiesa and Anthony Pettis, as well as a light heavyweight tilt between kickboxing legend Gokhan Saki and “The War Horse” Khalil Rountree Jr. to open the broadcast.

There’s also a host of intriguing matchups on the undercard including Mike Perry vs. Paul Felder, Uriah Hall vs. Paulo Costa, and a women’s strawweight fight between Jamie Moyle and Emily Whitmire.

Here’s a look at the full lineup for this historic UFC 226 event: