Carlos Condit was submitted by Alex “Cowboy” Oliveira in the second round Saturday night at UFC on Fox 29 in Glendale, Ariz. Oliveira took the fight on short notice and it was The Natural Born Killer’s fourth straight loss inside the octagon. As a former WEC welterweight champion and former UFC interim welterweight champion, that has to be a hard pill to swallow. Condit has put on some of the most amazing and memorable performances over the years and his 93% finishing ratio speaks to just how entertaining he has always been inside the cage.

This is Condit’s sixteenth year fighting as a professional. And with 42 fights under his belt, that’s a lot of mileage on the 33-year-old Albuquerque native, who win or lose, always brings it. In a Facebook post Tuesday, Condit admitted that maybe his time has passed as a professional fighter.

“I don’t know what’s next guys… I still love this game, and most days I still feel that fire, I absolutely love what it do, but maybe my time has passed. I don’t know the answer. this is what I know, this is my passion. I will never stop training, and If that leads me back to the octagon, you know I’ll try to make it bloody for ya.”

Change. It’s the one constant in this life and that day comes for every pro fighter when it’s time to close that chapter. But as a true martial artist, Condit says he will never stop training and seems to leave the door open for a possible return to the octagon for more bloodshed. Of course, could we expect anything less from such a warrior? There’s no use in us trying to decide what’s best for his health or future. It’s a decision every fighter must grapple with as they continue along this journey. All the best to you Carlos Condit, and if this was your last fight, thank you for the memories. 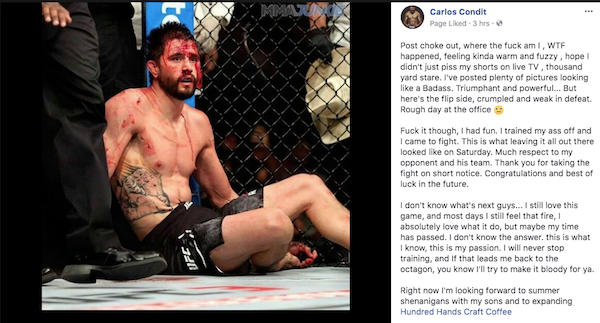