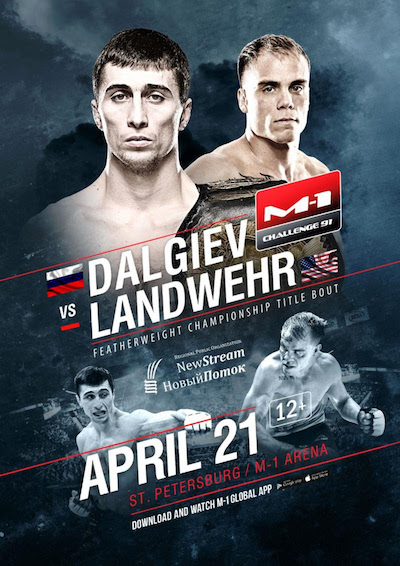 The time has come. Clarksville, Tennessee’s Nate “The Train” Landwehr (10-2) will travel back to Russia to challenge Khamzat Dalgiev (10-1) for the M-1 Global Featherweight Championship on April 21. The two will serve as the main event for M-1 Challenge 91 at the new M-1 Arena in St. Petersburg.

M-1 Challenge 91 will be live-streamed from Russia in high definition on www.M1Global.TV. Viewers will be able to watch the preliminary fights and main card by logging on to register at www.M1Global.TV. Fans may watch all the action on their computers, as well as on Android and Apple smart phones and tablets. M-1 Challenge 91 will also be available on www.FITE.TV (preliminary card is free, $7.99 for the main card).

Landwehr made his M-1 debut last September when he knocked out Mikhail Korobkov (13-2-1) in the second round at M-1 Challenge 83. The Russian fans loved Landwehr’s aggressive style and showmanship and demanded more. They got their wish.

The 29-year-old SSF Submission Academy product returned to Russia two months later for a “Fight of the Year” caliber performance where he upset the highly touted Viktor Kolesnik (13-3-1) via split decision in front of his countrymen. M-1 officials realized then they had found a new superstar and a shot at the 145-pound championship for Landwehr was in order.

Russia’s Dalgiev (10-1-0) has won 10 fights in a row since he lost his pro debut in 2014. Last November at M-1 Challenge 86, Dalgiev turned in a shocking performance, knocking out longtime M-1 Challenge featherweight champion Ivan Buchinger (33-6) in the opening round with a thunderous punch that made him an instant star.

Dalgiev-Landwehr is being called one of the most anticipated M-1 Global showdowns in years. With both fighters’ entertaining styles and being able to end the fight at any moment and with so much on the line, this is definitely an event not to be missed. Mark your calendars for April 21 and get ready for the fireworks.