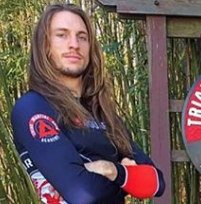 BJJ black belt Daniel O’Brien is taking his grappling game to the next level. The Triad Martial Arts instructor recently competed at the Kukoto Challenge and wore a blindfold during his matches. He won the first round against a Black Belt and won round 2 against a Brown Belt with an armlock. He ended up submitting three opponents before losing in the fourth round. That’s pretty damn good! Check out this footage from the tournament.

Renowned martial arts instructor and longtime friend of Pro MMA Now, Dan “The Wolfman” Theodore recently posted this video of him practicing closed eye sensitivity awareness drills against an opponent. He also shows off some Aikido and anti-grappling Systema attacks. Check it out and let us know if you think training blindfolded and some of these more esoteric traditional martial arts techniques have a place in modern grappling and MMA?