“Raging” Al Iaquinta has a bone to pick with the UFC following his devastating first-round knockout of Diego Sanchez Saturday night in Nashville, Tenn. The two faced off in the lightweight co-main event live on FS1 from Bridgestone Arena and Iaquinta delivered in a big way. Prior to the fight, the 29-year-old New York native had been on a two-year hiatus from the sport during which time he’d been selling real estate.

Despite the big win, Iaquinta isn’t happy with his current UFC contract and is no hurry to get back in the cage. He likes selling real estate and doesn’t feel the payoff for fighting has been worth it during his MMA career. Iaquinta said he made $26,000 (to show) and $26,000 (to win) for the victory over Sanchez. But when he found out he didn’t get one of the traditional fight-night performance bonuses, he was especially pissed and let it be known on Twitter. 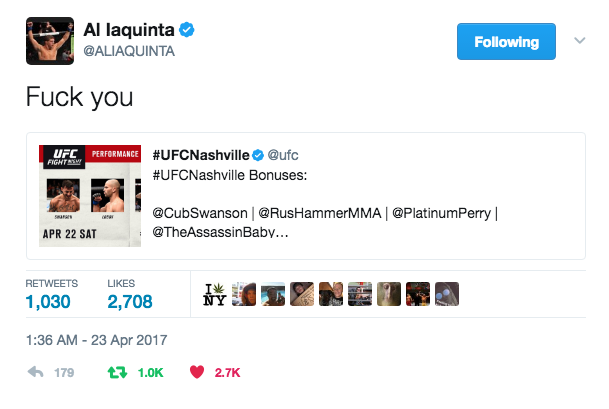 Iaquinta has had 10 fights in the UFC and is 8-2 in the octagon. And he’s knocked out four of his last five opponents, including Rodrigo Damm, Ross Pearson and Joe Lauzon. Prior to Sanchez, “Raging” won a decision over Jorge Masvidal in April 2015.

Iaquinta discussed his thoughts on pay and more in this post-fight scrum courtesy of Sherdog: