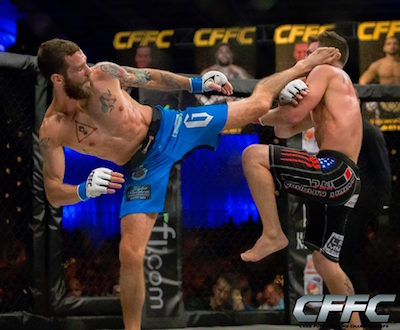 Before Jacob Bohn faces UFC vet Sean Soriano at CES 44 on May 12, the rising New York featherweight sat down with Pro MMA Now.

How does it feel to be on the verge of making your CES debut coming up on May 12th?

It feels really good, I’m just training hard. I’ve been getting ready and training for a while, now. I was going to fight a while back but my main red belt from Brazil was in town giving a seminar, so it had to be pushed back. Unfortunately, it was the card Dana White was at. He was watching fighters get ready for his show, Lookin’ For A Fight. So I had to miss out on that one. It was alright, my red belt was turning eighty and it was his seventieth year of doing jiu-jitsu, so I really wanted to be there for him.

Most guys on the verge of signing with the UFC aren’t looking to take a fight with a dangerous guy like Sean Soriano. What was your thought process behind taking this opportunity?

I‘ve got something of a game plan, so I’m not going to give it all away here. I don’t feel like he’s very sharp on the ground. I’ve been killing my stand-up and I don’t really know if he can hang with my angles. I’ve got a lot of footwork and head movement, whereas he’s kind of a straight forward-moving guy. He bangs, he’s really good on his feet but I’ve been killing my stand-up lately. We’ve looked at it every which way and I just don’t think he’s got it. He’s got all the credentials and experience from previous fights, but I’m on the up and coming and I just don’t see myself losing this one.

What will victory mean for your career?

It’ll be a stepping stone in the right direction towards the UFC. It will be a good victory. I’ve been killing my stand-up, and doing that has allowed me to strengthen those other parts of my game as well. I’ve been wrestling since I was five, did jiu-jitsu and stand-up. Beating a guy who’s been in UFC four times will be great.