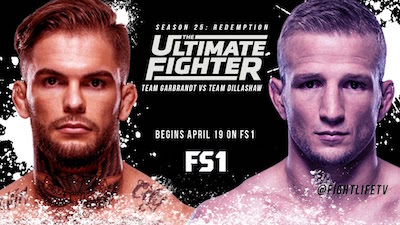 The Ultimate Fighter 25: Redemption series starts tonight on FS1 at 10 p.m. ET/7 p.m. PT and we’ll have a live blog of the episode right here. The cast of welterweights have all competed on previous seasons of The Ultimate Fighter and the opposing coaches are Bantamweight champ Cody Garbrandt and arch rival TJ Dillashaw.

We get to hear the stories of some of the past contestants as the show starts. Joe Stevenson’s story is quite touching as he talks about battling alcoholism.

We hear Jesse Taylor’s story about he got kicked off season 7 before the finals. Taylor said he never gave up on his UFC dream.

James Krause explains his reasons for returning to TUF despite being the only fighter on the cast who is currently on the UFC roster. Krause says it’s a lot of money and a chance for redemption.

Coaches Garbrandt and Dillashaw are introduced and Garbrandt is shown interviewing the fighters.

There will be a wildcard fight.

First fight will be Gilbert Smith vs. Seth Baczynski, next will be James Krause vs. Hector Urbina.

Urbina weighs 194 pounds at the moment and has a lot of weight to shed before the fight.

We get a look at Gilbert Smith and Seth Baczynski’s back stories. Seth talks about the murder of his sister and how he and his brother are raising her children.

Urbina is shown trying to cut weight. Garbrandt points out how negative Urbina’s attitude is and says he’s being “a little bitch”. Day before weigh ins Urbina is at 188 pounds and it’s not looking good at all. Urbina finally breaks the news to Garbrandt that he’s pulling out of the fight and can’t make weight. Dana releases him from the show and takes the coaches to decide what’s next.

Garbrandt picks alternate Johnny Nunez to replace Hector and fight Krause at a later date. Gilbert is not happy he was picked last and picked first to fight. Seth overhears him talking about beating guys that beat him and confronts him. They have words the day before their fight and have to be separated. Then it’s time for weigh-ins and Gilbert starts having words with Cody and then TJ chimes and and Cody grabs him by the throat! Awww shit, all hell done broke loose. The teammates break it up before it gets too serious and things settle down pretty quick.

Weigh-ins are next for Gilbert and Seth’s fight. Staredowns are intense as Gilbert stays focused straight ahead not letting Seth get in his head as he taunts.

The TUF uniforms are always interesting to see because the designs are often quite bad. This season the colors are red and blue with white trim. The uniforms are quite plain and lack originality.

Round 1 – Nice left from Gilbert. Low kick and they clinch, knee from Gilbert. Dirty boxing from both, uppercut on the break from Gilbert. Jab. Straight left. Takedown attempt from gilbert stuffed. Seth touches him up with a couple shots, then Gilbert goes for another takedown, takes several elbows to the side of the head but gets Seth down and goes for his back. Seth gets up briefly but gets dragged right back down and Gilbert is on his back looking for the choke with 90 seconds to go. Gilbert continues to soften him up with punches and Seth is bleeding a bit. 10-9 Gilbert

Round 2 – Low kick from Gilbert. Two hard body kicks from Gilbert and then a takedown. Seth gets to his feet and jumps on a guillotine but can’t finish. Gilbert on top now in half guard with punches and hammerfists. Gilbert staying very tight on the ground as Seth fights his best to get to his feet. Gilbert not giving an inch and puts him right back down the moment he gets up. Inside full guard Gilbert stays busy with punches. Gilbert stays very buys until the bell. 10-9 Gilbert

Eddie Gordon is picked to fight Tom Gallichio next.