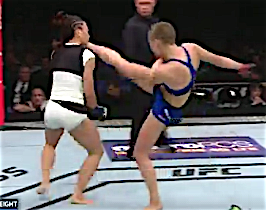 Rose Namajunas just sent a huge message to the strawweight division with her second round submission win over Michelle Waterson Saturday night at UFC on FOX 24 in Kansas City. But it was this head kick that was the beginning of the end for Karate Hottie as Rose dropped her hard. The kick was reminiscent of Holly Holm’s memorable head kick KO of Ronda Rousey, except Waterson was able to somehow survive a little longer until Rose took her back and sunk in the fight-ending choke!