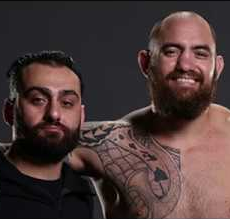 No coach in the history of MMA has gotten more of an online beating than Ronda Rousey’s infamous coach Edmond Tarverdyan. MMA fans and fighters alike have criticized Tarverdyan for his coaching style and for the perceived lack of improvement seen in Rousey’s last two outings. Former heavyweight title contender and main squeeze of Rousey, Travis Browne, has also taken a fair amount of criticism for sticking with Tarverdyan despite some lackluster showings inside the octagon.

Browne will be facing fellow heavyweight top-10 fighter Derrick Lewis in the UFC Fight Night 105 main event on Sunday in Canada. And it now appears Browne has decided to forego having Tarverdyan in his corner and instead will have famed striker and former K-1 champ Ray “Sugarfoot” Sefo, along with grappling and strength and conditioning coach Ricky Lundell.

Travis Browne confirmed to me that Edmond Tarverdyan will NOT be in his corner at #UFCHalifax. Ray Sefo & Ricky Lundell get the assignment.

However, Browne maintains that he hasn’t left Tarverdyan for good. He tells Fox Sports’s Damon Martin:

“Most people really don’t care but it’s just funny that some people try to make a headline out of that. Then the problem is you get some people that have a little bit of a stand with the MMA community and they read a tabloid headline and then say ‘I think Travis did this because of this’ or ‘I think this because of that’ and it’s like dude, you’re just feeding the idiots.”

Browne may not be saying he’s left Tarverdyan for good, but if he wins big on Sunday, it will be hard to argue with the results and not go ahead and make the jump, especially since he’s on the first two-fight skid of his career.

It is at least probably a good sign that he has chose to try and change what wasn’t working. And he probably realized, this sort of advice wasn’t going to be much of a help against the hard hitting “Black Beast” Derrick Lewis: