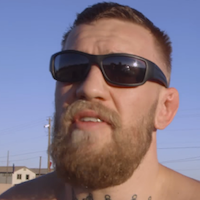 Don’t ask the King of Dublin to join any MMA fighters union anytime soon. Two-division UFC champ Conor McGregor has been racking up millions inside the UFC Octagon and feels fighters need to do what they need to do to make it happen for themselves and not leave it up to some union to “save” them. He tells GQ Style in the new Spring 2017 issue:

“I saw this union thing they tried to do––they reminded me of the people that march about the politicians. It’s you gotta do it. You’re in control of yourself…. People like to blame others. I think a person should just look at their own situation, look around them, find out what they wish to do, and seek and go and do that. And that’s it… Like all these fighters: ‘This union is gonna save us!’ What do you mean, it’s gonna save you, exactly? …I just think it’s a crazy thing to spend energy on… standing on a fucking picket…I don’t know.”

Is it hard for the MMA millionaire to empathize with the up-and-comers less fortunate than him, or does he have a legitimate point?

The potential Conor McGregor-Floyd Mayweather boxing match seems to be gaining steam, but there are still a few hurdles to cross. Have you seen the odds?