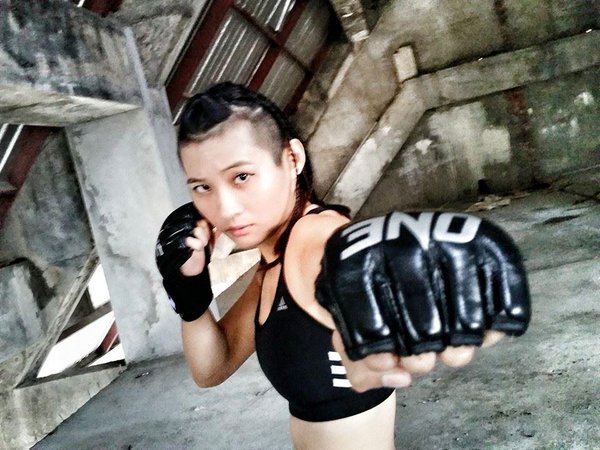 Jenny Huang is Taiwan’s first professional female mixed martial arts fighter. She holds a perfect record of 5-0 and is currently signed to ONE FC’s atomweight division. Out of her 5 wins, 3 have come via submission. She most recently competed on Dec. 2 at One Championship: Age of Domination where she defeated Filipino fighter April Osenio via a rare gogoplata submission.

The 25-year-old answered questions about her personal life, future and opened up about her life outside the cage in our interview.

What got you into MMA? What is your combat sport background?

I have studied Judo for six years when I was in elementary school. After that I went to Singapore to work in there, and tried some MMA classes in different dojos and things have taken off since then.

Did people around you support the decision of taking this sport as a career? Is MMA your only source of income? What are your other hobbies apart from fighting?

My parents are the only ones who wish to see me pursue a different vocation, but everyone else shows enormous support for my career choice and I am very grateful for their support. I also teach female fighting classes at my dojo. It is a very fulfilling job to inspire others to become very strong.

I also really like parkour and playing the ukulele. I like hanging out with friends and chit chatting etc.

You hold an unbeaten record. Does that add pressure?

Now that I have won five fights in a row the pressure is starting to build up. But I am totally fine now. It is always a fighter’s job to improve yourself and I just want to see how far I can go.

What is your game plan as you enter the fight?

Each fight is very different. Every fighter creates a new strategy to take down their opponent. I always spend a lot of time preparing new strategies for the opponent I’m about to face.

You are currently signed up with ONE FC. The champion of the promotion is Angela Lee, your thoughts on her?

I have the highest level of respect for Angela Lee. She is a very professional fighter and she works very hard for the results she’s gotten. If I ever get the chance to fight her, it will be a great honor.

Do you see yourself getting a title shot in near future?

I will go hard for it.

UFC doesn’t have a women atomweight division. Do you have plans on moving up a weight class?

I am very comfortable where I am with One FC and I am very happy with how things are right now.

I would be very interested to see a weight class that’s under 48 kg (105lbs). The people in my weight class are always much taller than me and if I could be in a lower weight class then we’d have a more equal footing in this regard.

What are your thoughts on the position of women in the MMA world and the conservative attitude of people saying women cannot fight?

There are many foolish people with archaic thoughts in this world. The world is changing very fast there days. Women have every right to do everything men can. Women can become president and should have every right to make as much as men. To limit people based upon attributes such as gender are powerfully limiting and damaging to people in many ways. It is not and should not be the role of anyone to say what another can and cannot do. I hope no woman ever let’s a man try to limit her. It has been my life’s work to show the world how strong women can really be.

What is your message to every person who wants to take MMA as a career?

You don’t have to worry about your age. Don’t let things like your age stop you from pursuing your dream. There are plenty of fighters who are 40 and hold championship belts well. Experience, dedication and determination are the most important factors in winning. However, it is important to know that fighting is not for the faint of heart. You should not rely on luck to win. It takes a lot of hard work on a daily basis to win. I am what I am because of the mountain of training I’ve been doing. Even if you don’t make a career about it, being healthy is very important as is learning how to defend yourself.