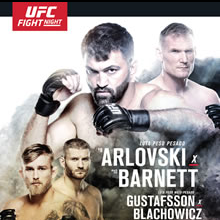 For all you gamblers out there who aren’t busy playing the Vegas Casino or your local Slot machine, you may be looking to lay some money down on one of this weekend’s big fights.

Thoughts on the main event:

Both Arlovski and Barnett have had some tough losses recently. At one time there was some question of Arlovski’s chin and whether he should continue fighting. After getting TKO’d in his last two fights, by Stipe Miocic and Alistair Overeem respectively, those questions are bound to rise again and this fight will give us more data toward forming that opinion.

Following a KO loss to Travis Browne in Dec. 2013, Barnett was on the sidelines for nearly two years. On his return in September of last year he won a unanimous decision over the very durable Roy Nelson. Barnett then returned in January of this year only to be submitted by Ben Rothwell. You win some, you lose some, but Barnett is still as tough and as dangerous as they come. And no one is really questioning that Viking chin of his at this point as he’s only been knocked out twice in his nearly 20-year pro MMA career. Arlovski, on the other hand, has nine knockout losses on his record.

Arlovksi could get the job done with his striking if he’s on point, but with two TKO losses already this year, “The Pit Bull” is in a must-win situation and his back is to the wall. We know what happens when Pit Bulls are cornered, but if anyone can handle the pressure it’s The Warmaster”.

And if you’re tired of losing money at the sportsbook and casino, you may want to Play Free Vegas Slot Machines.