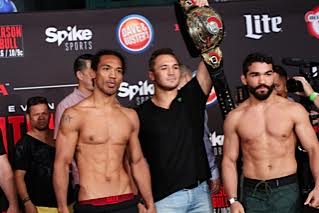 ANAHEIM, Calif. – Benson Henderson (24-6) finally earned his first victory since joining the Bellator MMA fray at Honda Center in Anaheim, Calif., Friday night. The victory was listed as a TKO due to Pitbull’s inability to continue from a broken tibia, as a result Henson was immediately declared the winner. The victory was awarded by the referee when it appeared that Patricio “Pitbull” Freire (25-4) suffered a leg injury at 2:26 seconds into the second round.

Benson made the jump up to Bellator MMA’s 170-pound division in his debut in April, however against Pitbull he returned to the weight class where he was most dominant in the UFC as a Lightweight. After the victory, it was announced that Henderson’s next opponent would be Bellator MMA’s current Lightweight Champion, Michael Chandler. The two are scheduled to battle on November 19 in the main event in San Jose.

Georgi Karakhanyan (25-6-1) needed only 53 seconds of the first round to take out Bubba Jenkins (11-3), as the Russian Millennium featherweight fighter took care of business with a classic denouement. “Insane” came into the cage joined with intelligence personified as his fighting companion capturing Jenkins’ attempted leg kick with a calculated Sanda reversal that sent Jenkins to the mat with an early knockout, earning his 11th win in his last 14 fights. Georgi employed Sanshou aka Sanda fighting stylized tactic whose asset is to author diverse ancient fight forms as hybrid counter maneuvers. This is the third loss of Jenkins’ young career and his second from Karakhanyan. The victory is the fifth knockout of Karakhanyan’s career.

In the opening contest at “Bellator 160: Henderson vs. Pitbull,” A.J. “Mercenary” McKee (5-0) continued his unbeaten streak with a branded guillotine choke submission at 32 seconds into the second round. McKee toyed with his opponent even though Walker was able to do what no other man has ever done in taking the Mercenary into the second round. All of McKee’s previous four wins were from first round finishes. The win capped off an impressive night by Antonio McKee’s Team Bodyshop, as AJ McKee’s teammates, both Joey Davis (1-0) and Gabriel Green (4-0), also had their arms raised in the preliminary portion of the event. As one of Bellator MMA’s top young featherweight talents, the 21-year-old McKee was able to prove once again that he belongs among Bellator’s elite talents. After the fight, the Long Beach native lobbied for a fight with current 145-pound champ Daniel Straus.

During the event, Bellator formally introduced and announced the signing of mixed martial arts superstar Rory MacDonald to an exclusive, multi-year, multi-fight contract making “Red King” the latest talented acquisition to the roster. In affirmation the Red King stated, “There are multiple reasons why I choose to fight for Bellator MMA and Scott Coker. One, they have given me the opportunity to develop and grow a business together. Two, because I already feel respected by the promotion as a professional athlete. And last but not least, because Bellator is offering a setup that no-one in the world can offer me.” Bellator finally offered him a deal which was simply interested in his well being, as the Canadian sadly only made $59,000 for his UFC championship fight against “Ruthless” Robbie Lawler. Injuries will likely keep MacDonald sidelined until Summer 2017.