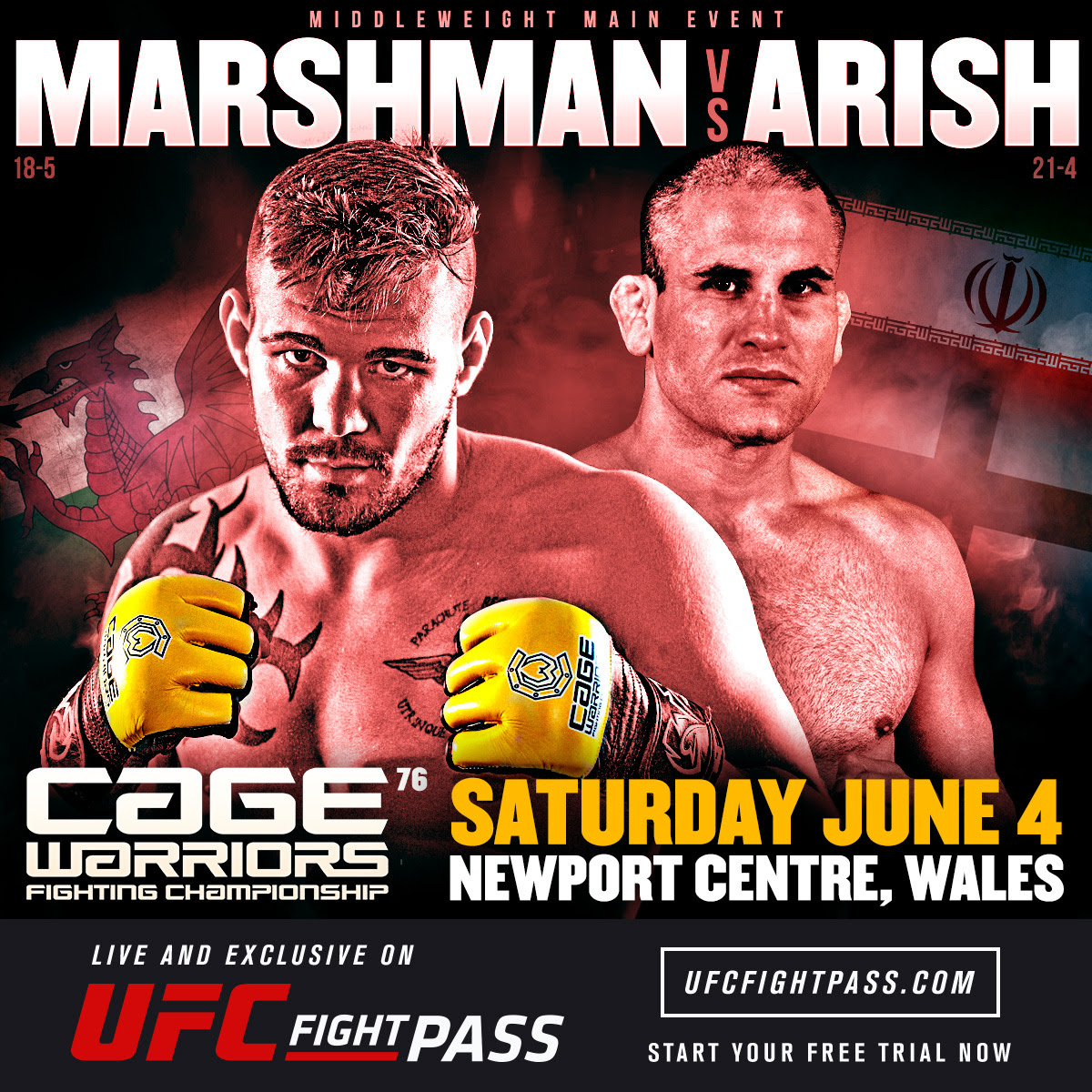 Today the main event for Cage Warriors Fighting Championship 76 was announced as Welshman Jack ‘The Hammer’ Marshman takes on Ali Arish in a middleweight showdown. This will be CWFC’s second show to air on UFC Fight Pass, the UFC’s on-demand and live streaming service.

The event takes place at the Newport Centre in Wales on Saturday, June 4th. Following struggles with fighters dropping off the card, Cage Warriors matchmaker Ian Dean explained that he was happy to have finalized the bout between Marshman and Arish:

“After several other fights fell through it’s great to get Jack Marshman a credible and tough opponent upon his return to Cage Warriors. Ali Arish has been in there against some top domestic names and doesn’t turn-up to lose.  I give credit to both fighters for accepting what is a tough, stylistic match-up for them.  That being said this is the classic striker/grappler clash and it’s going to be interesting to see how Marshman copes with Arish’s wrestling based offence as he looks for the KO himself.” – Ian Dean

Jack Marshman (18-5) enters this fight riding a four-fight winning streak. He was last in action at Pain Pit Fight Night 15 in March, where he secured a second round submission victory over Shaun Lomas. Prior to that he picked up notable wins over Kyle Redfearn, Che Mills and Bola Omoyele. ‘The Hammer’ will no doubt look to move up the middleweight rankings and extend his streak to five with a good performance against Arish.

“I’m very excited to be fighting on this show against a very good opponent with a great record.  I’m looking forward to showing everyone how much I have improved since the last time Cage Warriors came to Wales.” – Jack Marshman

Arish (21-4), who hasn’t fought since June, 2015, will want to build on his win over Julio Cesar Alves at Ice FC 6. The victory over Alves snapped a two-fight losing skid that Arish had been on during 2014/2015. A big win over Marshman would solidify Ali as a top middleweight contender and prove that his inactivity over the past 12 months has not affected how dangerous he can be once the cage door closes.

“I am so happy I’m fighting on Cage Warriors, it’s one of the best shows in the world. I’m going to fight Jack Marshman from Wales and he is one of the top ten-ranked fighters in the UK and I’m so glad I’m going to fight against this gentleman.  I’m looking forward to it and I can say it will be a great night for both of us.” – Ali Arish

This fight has all the ingredients needed to result in an exciting battle. Both fighters are well-rounded and have the ability to end the fight on the ground, or the feet.

Here is the current fight card for CWFC 76:

More fights are expected to be announced in the near future. Stay tuned to ProMMANow.com for all the latest MMA news.