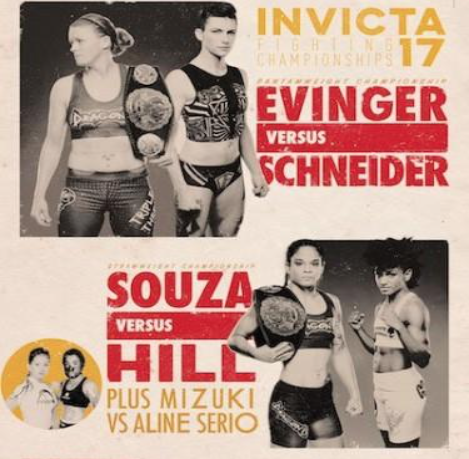 Invicta FC has established itself as the world’s best women’s MMA promotion. It is one of the major league promotions after UFC and the best platform for women to display their talent and prove themselves to the world. And it has acted as the backbone of the UFC women’s division.

Some of the most popular female fighters in UFC came through Invicta including Sara McMann, Cat Zingano, Raquel Pennington, Carla Esparza, Paige VanZant, Rose Namajunas and many more.

Invicta FC 17 will be held on May 7 at the OC Fair & Event Center in Costa Mesa, Calif., and will stream live on Fight Pass. The main event will be for the Invicta FC bantamweight championship as reigning champion Tonya Evinger looks for her ninth straight win against challenger Colleen Schneider, who is riding a four-fight winning streak.

This event also features Livia Renata Souza defending her straw-weight championship against Angela Hill. Souza is unbeaten at 9-0, with 7 wins coming by way of submission. She had her career’s first KO victory at Invicta FC 15 in January over DeAnna Bennett. Angela has already knocked out two opponents since debuting with Invicta in January; first Alida Grey, then Stephanie Eggink.

This event will test the capability of some of the most experienced female fighters locking horns and pushing each other to a great extent.

Let’s take a look at the matches and the fighters who need to win the match.

For Latoya Walker this is the most important fight of her career. She is undefeated and is the strongest contender against Cris Cyborg in the promotion. If she manages to win this match she makes sure that she receives a title shot. But Tweet is actually not sweet, If Latoya is a super strong fighter, then Tweet too is a good striker, a super kickboxer and has the talent to subdue any person. Apart from that if Charmaine manages a victory she can get back in the title picture.

This is a flyweight brawl. Christine goes in the cate with a record of 4-1 and Sinn with 2-2. Both flyweights are talented but this fight will see Christine coming off as a winner. Christine has won 4 matches in her career and all of them have come by knockouts, her only loss was at the hands of Justine Kish. Wondering what makes the match important? Well the answer is UFC. UFC recently announced that they were having a women’s flyweight brawl and that means they are soon going to have a flyweight division. And for a division they need talented fighters, and that means Dana White will be looking for fighters for this division and this is the opportunity for these women to prove themselves.

UFC will soon have either a season of The Ultimate Fighter to crown a champion or a tournament to declare the winner, whatever is the case they will need women to make the division and one of these fighters can book her place in it.

This is one of the most explosive bouts announced for the event and it could go either way. Angela was released from the UFC last year after back-to-back losses to Rose Namajunas and Tecia Torres. However, after racking up two impressive wins already this year in Invicta, this will be her third fight in five months. That could be a good thing to keep the momentum going. She will be Souza’s toughest opponent to date, who has yet to face an elite level striker such as Hill. Souza is a black belt in BJJ and has finished off 8 of her 9 opponents. She is a submission specialist but recently scored her first knockout finish.

Tonya Evinger is a real veteran who holds a superior record of 17-5 and is coming off a TKO win over Pannie Kianzad last September in a non-title match. Tonya is riding a very impressive eight-fight winning streak and claimed the Invicta bantamweight title last July with a fourth round TKO over Irene Aldana. Colleen holds a record of 10-6 and is on a four fight win streak, most recently defeating Raquel Pa’aluhi via split decision in January. Colleen became the inaugural SFL women’s bantamweight champion back in 2014 and has continued to evolve her game. A win over Evinger could punch her ticket to the UFC.

Let’s see which women manageto win their respective prize and prove to the world they are the best.

But we should not forget all women must fight. Let the game of belts begin.