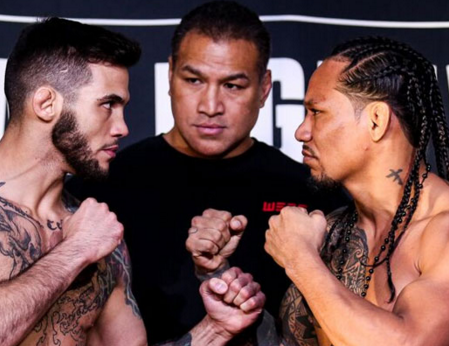 World Series of Fighting presents WSOF 25 this evening from Comerica Theatre in Phoenix, Ariz., and featuring an eight-man one-night tournament. Eight lightweights will compete for the number one contender spot in the 155-pound division. We will have live results of all the action right here starting with preliminary card (watch on WSOF.com) at 8 p.m. ET (5 p.m. PT), then moving to the NBC Sports Network televised main card at 9 p.m. ET (6 p.m. PT).

NOTES.1: This fight was SICK! Foster got rocked more than once and each time came back harder. He was able to sprawl on several takedown attempts from Zeferino and keep it standing for periods of time. Definite fight of the year candidate. Brian Foster deserves a ton of credit for making adjustments between his first fight with Zeferino earlier in the night. When it did go to the ground in the finals, Foster was able to defend the heel hook and other submission attempts, and he himself went for submissions.

NOTES.0: This lightweight tournament final is an interesting matchup because the two already fought in the quarterfinals and Zeferino submitted Foster in the first round with a heel hook. Zeferino also submitted his semifinal opponent with a heel hook in the first round. Mike Ricci was supposed to face Luis Palomino in the semifinals, but an injury took him out and Foster was brought back in, he won and now moves on to face Zeferino once again, this time in the finals. Lookout for that heel hook!

Brian Foster’s finish of Joao Zeferino in the finals

This about sums up Brian Foster’s performance