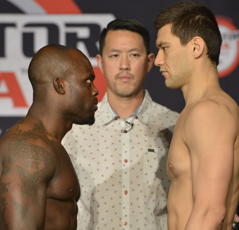 “Bellator 146: Kato vs. Manhoef” takes place this evening from WinStar World Casino in Thackerville, Okla. The headlining bout is a middleweight matchup between dangerous kickboxer Melvin Manhoef and Japanese KO artist Hisaki Kato. Also on the card, Bubba Jenkins faces Jordan Parsons, Chidi Njokuani takes on “The Sniper” Ricky Rainey, and Houston Alexander returns against Guilherme Viana. There’s some good names on the prelims as well. All this and more tonight from Bellator 146.

Stick with us here for live fight results of all the action and round-by-round updates of the main card coinciding with the Spike broadcast beginning at 8 p.m. ET (5 p.m. PT). Catch the prelims over at Spike.com starting at 7 p.m. ET (4 p.m. PT).

Round 1 – Viana the taller and longer fighter.Viana finding some success with a left hook. Nice jab from Houston. Right hook behind the ear from Viana then a left hook, hard shots, snapping Houston’s head. Houston has a helluva chin, he’s taken some shots. He takes another left hook and goes to a knee, stands up, goes for a takedown.Viana takes him down but lets him up. Houston standing his ground trying to regain his faculties. Two minutes to go.Viana’s nose is bleeding. Big Thai clinch and knee to the body from Viana. Stiff left jab from Viana snapping the head of Alexander back. More jabs from Viana as Houston avoids a couple big punches. Big one two from Viana, Houston is bloody but standing firm. Body shot from Houston. 10-9 Viana.

Round 2 – Stiff jab from Viana. Huge left hook rocks Houston. He gets a takedown on Viana, but he’s right back up and batters Houston with more big punches. This guy has taken some HEAVY shots. Viana takes him down and lands punches to the side of the head as Houston tries to get to his feet. Viana takes Houston’s back, one hook in. 2:45 to go. Houston finally gets to his feet and stand in front of Viana the rest of the round, avoiding most of the punishment Viana was throwing at him, which wasn’t a lot. Viana looks to be fading. Houston is a warrior. 10-9 Viana.

They stopped the fight after the round. Houston has an enormous cut on his left eyelid and would need a finish to win. Good call.

Round 1 – Rainey rocked Njokuani with punches at one point and got the better of the standup throughout the round. 10-9 Rainey.

Round 2 – Rainey catches a leg kick and dumps Njokuani with a right hand accompanying it. Chidi is back up pretty quick, clinched, he lands an elbow. Chidi escapes the clinch. Right hand and low kick from Chidi then Rainey charges him to the cage. Long time in the clinch with Rainey controlling the action. Big John finally separates them. They wing a few punches, then Chidi gets underhooks and presses Rainey to the cage. Right over the top from Chidi. Half collar tie and a knee to the face from Chidi. High kick from Chidi. Rainey’s right eye looks to be bothering him. Clinched. Rainey goes for a spinning elbow at the bell. 10-9 Rainey.

Round 3 – Right from Rainey inside. Huge inside leg kick from Chidi. They tie up against the cage. Rainey’s right eye is a mess. He eventually gets Chidi to the ground but he’s right back up in just a couple seconds. Still clinched. Half the round down. Big John separates them. Body kick from Chidi. High kick, blocked. Right check hook from Chidi. Hard low kick, body kick. Rainey trying to find a way inside. Body kick from Chidi. Rainey ties him up, presses him to the cage then gets a takedown, lands a couple shots before the bell. 10-9 Rainey. Good showing from Rainey, though not that exciting in rounds 2 and 3, but understandable considering Rainey’s eye. He did what he had to do to win. … Or not.

Round 1 – Missed most of it while updating Lion Fight 26 results.

Round 2 – Nice right from Jenkins. Front kick from Parsons. Spinning backfist attempt from Jenkins, he pays for it with a punch. A head kick from Jenkins hurts Parsons badly, he shoots in to try and clear his head. Parsons looking for an armbar as he eats hammerfists and punches. Parsons gets up but eats a punch and gets taken back down.  10-9 Jenkins.

Round 3 – Parsons controlling the action against the cage about midway through the round. Parsons looking for a taekdown, lets it go and lands a couple punches. Jenkins with the takedown with under 2 minutes to go. Jenkins drops some elbows as Parsons fights to get up. Jenkins back up before the bell and lets Parsons up. 10-9 Jenkins.

Round 1 – Girtz  lands a straight left and a couple right hooks that put Campos down. He finishes him off with a couple more and that’s all she wrote.

Round 1 – These boys are throwing heat. A good exchange about 2 minutes in. Kato being very aggressive and looks to have Manhoef in trouble, one leaping left hook from Manhoef sends Kato to the canvas, and Big John stops it.