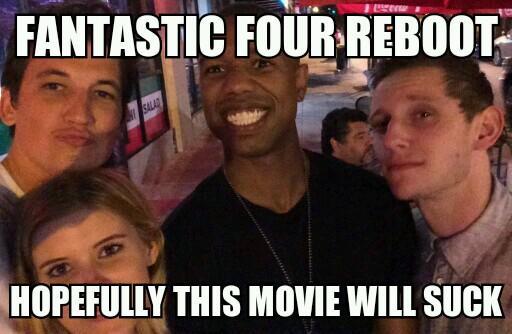 It almost happened. We almost won. But….

FOX has mucked up the Fantastic Four franchise three abysmal times. First with 2005’s cheesy camp fest launcher then they followed up with another bomb in 2007 in Rise of the Silver Surfer. So why did they feel the need to take a once promising comic to screen franchise and destroy it? Simple – they have no idea how to get it right and instead of doing what’s right and selling it back to Marvel they selfishly keep it. If you don’t believe watch 2015’s version *shudder* I dare you to make it all the way through.

Today there were joyous rumors that the idiotic creative team of FOX released the rights to Marvel so they could fix the franchise. WRONG. FOX came out and flat out crushed the rumors depressing fans everywhere as only they could.

Two words that remind us why we hate that studio sometimes. Their 2015 attempt at bringing the movie to life was met with some of the harshest criticism on the planet. They changed characters, cool back stories, and everything fun about the comics to make room for a gloomy, bloated “edgy” origin story that fell flat. Guess what? They plan on releasing a sequel to that steaming pile of film garbage out of sheer spite and arrogance.

FOX, if you want people to watch the Fantastic Four , you need to give it to Marvel because you can’t handle the responsibility. Maybe, just maybe, your three failed attempts were three too many. Fans may never give it another shot or enough won’t return to the franchise to convince you I’m right. I can tell you that I will not watch a Fantastic Four film again until it is back in Marvel’s capable hands.

Marvel later denied the rumors of getting the rights to the franchise and in doing so drove a stake in the hearts of all comic fans.