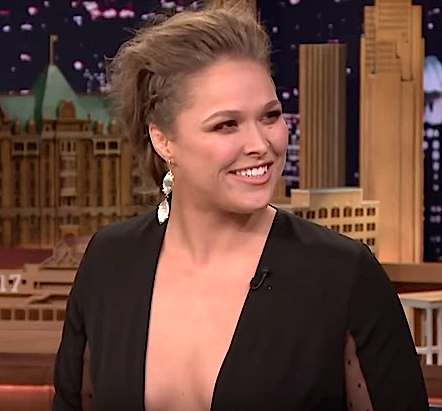 MMA’s biggest star Ronda Rousey was a guest on The Tonight Show with Jimmy Fallon last night to discuss her upcoming match against Holly Holm at UFC 193. Rousey, as always, makes a good sell of the fight putting her opponent over and touting the accolades of the Mike Winkeljohn-trained boxing champion. Rousey says this fight could likely take her longer because of Holm’s takedown defense and excellent striking. As good as she tries to sell it though, we know once Rousey closes the distance and gets her hands on Holm, it will be literally a matter of seconds before Holm is playing that one-handed bongo. … However, because Rousey is who she is, it’s also possible she will try to prove a point by beating Holm at her own game. Now wouldn’t that be something. She did it to Bethe Correia, and it’s not unfathomable that she would try to do it to Holly Holm.

Rousey also discussed her remarks about Floyd Mayweather at the ESPY’s when she said, “Now he knows what it feels like to be beat by a woman for once.” … And she talked about her 34-second win over Bethe Correia, explaining why it took her longer than her previous two fights combined.

And most by now know the champ is obsessed with Pokemon. Listen in as Rousey geeks out on video games.

Rousey will defend her UFC women’s bantamweight title against Holly Holm in the UFC 193 headliner on Nov. 15 at Etihad Stadium in Melbourne, Australia. The event will broadcast live on Pay-Per-View.