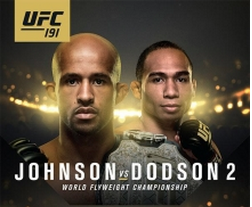 UFC 191: JOHNSON VS. DODSON 2 takes place this coming Saturday, Sept. 5, 2015, from MGM Grand Garden Arena in Las Vegas. Headlining the card is a Flyweight Championship bout with reigning king Demetrious Johnson taking on John Dodson in a rematch from their fight 2 1/2 years ago in which Johnson took home a unanimous decision but not without having to dig deep. If any man has a chance of toppling Johnson right now it’s Dodson, so that should be a good one.

In the co-headliner we’ve got two veterans on a resurgence with former UFC champions Frank Mir and Andrei Arlovski. With Mir ranked No. 10 and Arlovski currently ranked No. 4, an impressive win for either fighter could put them right in the mix for a title shot. And for either of them to be in that position at this stage of their careers is damn impressive.

And if that wasn’t enough UFC 191 also features an important light heavyweight showdown between No. 1 ranked Anthony Johnson and No. 7 ranked Jimi Manuwa. Johnson is coming off a title loss to Cormier in May, so if the hard-hitting Manuwa can get past Johnson, he will also be in the mix for a shot at the belt.

The full Countdown to UFC 191 show is below in three parts: